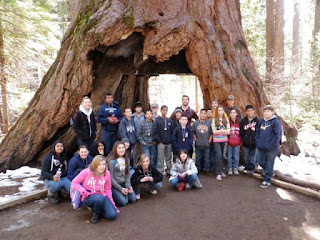 A powerful winter storm in California has brought down an ancient tree, carved into a living tunnel more than a century ago.

The "Pioneer Cabin Tree," a sequoia in Calaveras Big Trees State Park, saw horses and cars pass through it over the years. More recently, only hikers were allowed to walk through the massive tree.

Over the weekend, a powerful winter storm slammed into California and Nevada, prompting flooding and mudslides in some regions. The Associated Press reports it might be the biggest storm to hit the region in more than a decade. 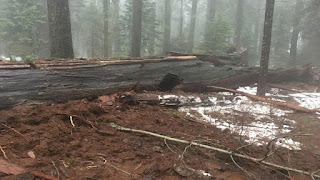 We visited Calavaras Big Tree State Park this summer, during the troubles. While we didn't see this tree (it must have been on a different trail), the Giant Sequoias are always impressive.


On Sunday, a volunteer at the state park reported that Pioneer Cabin had not survived.

"The storm was just too much for it," the Calaveras Big Tree Association wrote on Facebook.

It's unclear exactly how old the tree was, but The Los Angeles Times reports that the trees in the state park are estimated to be more than 1,000 years old. Sequoias can live for more than 3,000 years.

No word on whether or not it made a sound when it fell.
Posted by Fritz at 6:57 PM