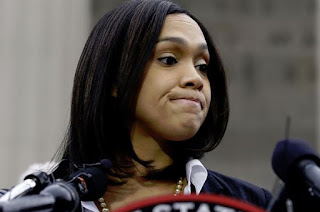 
A Federal judge is allowing key parts of a lawsuit against Baltimore State's Attorney Marilyn J. Mosby, brought by five of the six police officers charged in the death of Freddie Gray, to move forward.

U.S. District Judge Marvin J. Garbis ruled that claims including malicious prosecution, defamation, and invasion of privacy can move forward against Mosby and Assistant Sheriff Samuel Cogen, who wrote the statement of probable cause.

Mosby's attorneys had said she has absolute prosecutorial immunity from actions taken as a state's attorney. But Garbis noted that her office has said it conducted an independent investigation.

"Plaintiffs' malicious prosecution claims relate to her actions when functioning as an investigator and not as a prosecutor," Garbis wrote.

Related:  Baltimore City Police in ‘Crisis’ Due to Officer Shortage


Baltimore City’s Police Union is sounding the alarm because they say the department is in crisis due to the fact that it has too few officers.

According to a new report, there are more than 100 fewer Baltimore City PD officers than last year, with the union saying this poses a safety concern as officers are being overworked.

“You get in a crisis mode like we’re in right now with crime out of control and not enough uniformed officers on the street,” said Lt. Gene Ryan, president of the Baltimore City Fraternal Order of Police. “I would say it’s at a crisis point.”

Why would anyone want to be a police officer in Baltimore under Mosby?
Posted by Fritz at 3:59 PM