Outgoing Obama Admin Flips the Bird to the West 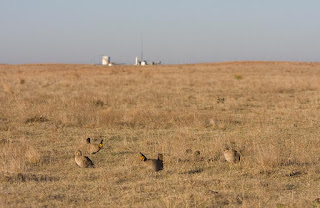 As the Obama Administration comes to a close, the Bureau of Land Management (BLM) is pushing ahead with its plan to restrict more federal land from future mining operations by putting 10 million acres in six states off limits.

“As part of its continuing efforts to conserve habitat vital to healthy populations of the Greater Sage-Grouse in the West, the Bureau of Land Management (BLM) today announced the draft proposal to withdraw a subset of lands that are sage-grouse strongholds from future mining claims,” read a press release posted on the BLM website on Thursday.

The announcement about the restrictions on land in Idaho, Montana, Nevada, Oregon, Utah and Wyoming, which was published in the Federal Register on Friday, said a 90-day public comment period will take place until March 30, 2017 and that the agency will host eight public meetings in the West next month. Needless to say, outside the environmental community, the action is not exactly popular.


Luke Popovich, vice president for external communications at the National Mining Association, said the move by the agency is not only not necessary, but also is destructive to the mining industry and to the larger national economy.

“This massive land withdrawal, the largest in history, is a spiteful and wholly unnecessary measure for protecting wildlife habitat that isn’t jeopardized by mining and appears instead to be a parting gift to activists who care nothing for the economic consequences to either the impacted states or the economy,” Popovich told CNSNews.com.

Popovich said the sage-grouse population is not declining and that wildfire and invasive species pose a greater threat than mining to the birds. Popovich also said the states being targeted and private industry, including mining, have put plans in place to protect the sage-grouse habitat.

As reported earlier by CNSNews.com, in 2015 Interior Secretary Sally Jewell announced that the sage-grouse would not be listed under the Endangered Species Act, which would have affected the birds’ habitats in 11 states.

Yet another last minute Obama legacy that Trump should revoke upon taking office.
Posted by Fritz at 5:46 PM