Trump orders hiring freeze for much of Federal government


President Trump on Monday issued an executive order implementing a hiring freeze across the federal government, with exceptions only for military, national security or public safety personnel.

Trump had raised the possibility of a hiring freeze during the campaign. At a news conference Monday, Trump spokesman Sean Spicer said the freeze ensures taxpayers get effective and efficient government and said it "counters the dramatic expansion of the federal workforce in recent years."

“Some people are working two, three jobs just to get by. And to see money get wasted in Washington on a job that is duplicative is insulting to the hard work that they do to pay their taxes,” Spicer said.

And that has EPA employees still ‘coming to work in tears’

At EPA headquarters, the mood remains dark. A longtime career communications employee said in a phone interview Tuesday that more than a few friends were “coming to work in tears” each morning as they grappled with balancing the practical need to keep their jobs with their concerns for the issues they work on.

This is not the first time EPA bureaucrats have been caught weeping at work because of their political concerns. A week after the election E&E News published a story on the scene at the EPA and Energy Department. Supervisors were said to be telling distraught employees to take sick leave and go home, something explicitly no allowed by the rules governing sick leave . . .

The new U.S. president signed an order on Tuesday that allowed TransCanada (TRP.TO) to reapply for a permit for Keystone XL, after it was rejected in 2015 by then-President Barack Obama on environmental concerns.

TransCanada Chief Executive Russ Girling said the firm was "diligently" preparing its application for the 1,179-mile (1,900 km) pipeline from Hardisty, Alberta, across the U.S. border to Steele City, Nebraska.
. . .
“But we haven’t engaged in direct conversation on that issue,” he said at an investors conference. “This wasn’t in our planning horizon in the middle of last year, so we’ve only just re-engaged with our shippers again.”

Watch the girl light the hair of the girl in the blue hat. This is you "occupy" democracy.


Hotel staffers who crossed protest barricades to treat a heart-attack victim outside the Trump International Hotel in Washington this weekend were treated to jeers and anti-Trump slogans by protesters.

Around 4 p.m. Saturday, a woman protester suffered a heart attack on the street outside the Trump hotel. The medical emergency sent a hotel staffer sprinting outside with an automated external defibrillator.

Protesters held back by crowd control barricades loudly booed the staffer before the man passed the defibrillator to law enforcement.


Ortiz told Pittsburgh's Action News 4 that his roommate -- whose name has not been released by police -- was drunk, angry over repeatedly losing money on the lottery and worried about what Trump will do as president.

Ortiz said that he and his roommate are from Mexico, and that the roommate feared Trump would force him and other immigrants out of the United States.

"He is paying his money on lottery, and now Donald Trump say, anybody got to go," Ortiz said.

Trump can even accomplish the Herculean task  of teaching liberals basic economics. 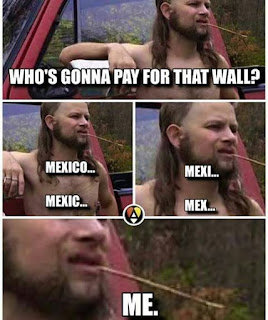