The Russian president was confronted by a topless protester with an obscene slogan insulting Mr Putin painted on her back - and, he admitted, he “liked” it.

Mr Putin was with German Chancellor Angela Merkel at at a trade fair in Hanover when the woman tried to push her way through to an amused-looking Mr Putin, but was blocked by aides. Her back was painted with an obscene slogan in Cyrillic script directed against the Russian president. 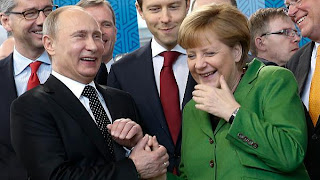 Putin and Merkel were less than impressed...

Although, I imagine that afterwards, someone on a security detail was chastised.  If he was Russian, probably whipped, or pistol whipped... 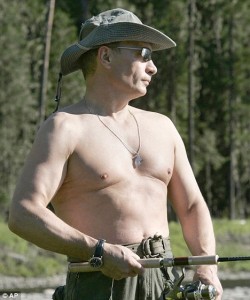 The activist was with two other women who also stripped to the waist and shouted slogans calling the Russian leader a “dictator”.

Merkel, of course, has had her own naked bathing press issue.  Thank goodness, no actual pictures are  provided.


The women appeared to be members of the feminist group Femen, which has staged topless protests against the sex industry and religious institutions.

Speaking at a press conference afterwards, Mr Putin said: “As for the protest, I liked it. In principle, we knew that such a protest was being prepared.” 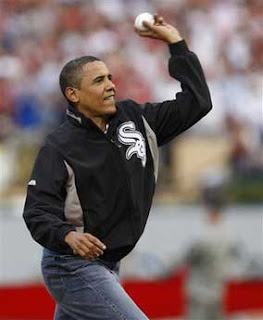 Putin, of course, is well known for have a number of shirtless photos, designed to make him look like a virile leader, in contrast to President Mom-Jeans.

At least Putin knows which side of a spinning reels goes up, unlike the Minnesota Gurls from last week.

I usually like to say I support whatever the girls of Femen oppose, on the grounds that I want them to keep protesting.  However, I have to say, Putin definitely falls out of that category.  However, the chances of him reversing course and become a democrat are negligible, so hopefully at least the girls will continue to protest.


More Femen pics below the fold 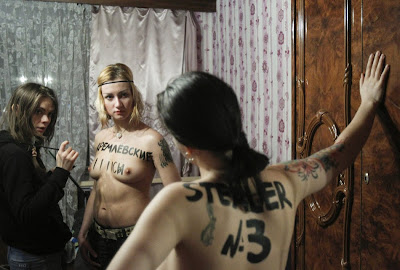 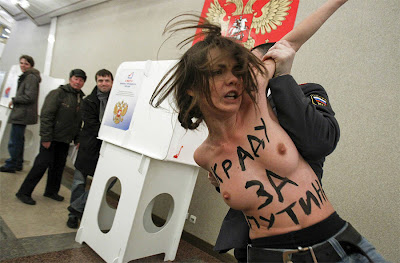 I also have to admit, I sat on the FEMEN protest in support of Tunisia's Amina Tyler a little too long, and missed an opportunity to post more Femen pics.  Or not.  Another example where FEMEN came down on a side I agree with.

Femen Stages a 'Topless Jihad'
A rather complete photos spread on FEMEN's Paris and Berlin protest... 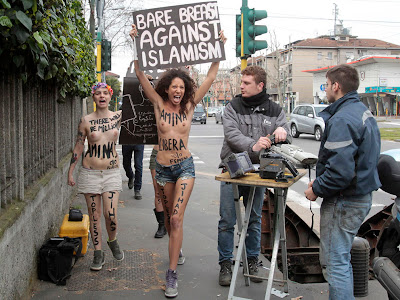 Curious that the sign is in English, isn't it?  FEMEN is nominally Ukrainian, and the protest is in Paris and Berlin.  At least for Vlad they wrote in Cyrillic. 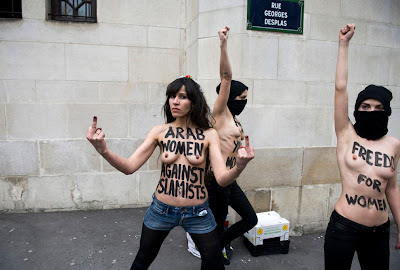 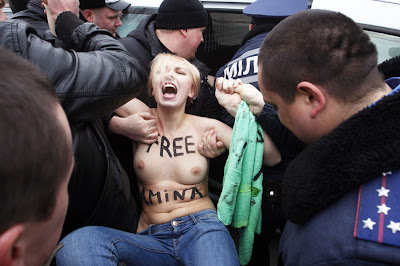 Wombat-Socho got "Rule 5 Sunday Wednesday: Once More into the Bleach" done on Wednesday this week; he says he's skipping next week to slave in the tax mines, and promises a double sized in the following week.  So check back Saturday morning to see what I've cooked up.
Posted by Fritz at 6:00 AM