A few stories showing up today about how various counties affect the the 'Rain Tax' are showing resistance to being required to tax their constituents for impermeable surfaces:


County residents will be charged a $125 stormwater fee, but will only be required to pay 10 percent of it.

After weeks of debate, the Harford County Council Tuesday passed a significantly amended version of the contentious stormwater fee bill, designed to generate funds to help treat stormwater and improve water quality of the Chesapeake Bay; only Councilman Chad Shrodes voted against it.

Council members said they were pleased to only require residents to pay 10 percent of a $125 fee per each home or property. They also set up a task force that will study the bill's implementation and make recommendations in November.

"I know this was difficult but I think this is a good way to go," Council President Billy Boniface said. "The hammer isn't going to come down on us by the state."


A state senator from Pasadena has called on County Executive Laura Neuman to veto the stormwater tax narrowly passed by the County Council Monday night.

Sen. Bryan Simonaire, R-Pasadena, asked Neuman to send the legislation back to the councilmen and request the council lower the tax, which would take effect in July, to $1.

He recommended a series of public hearings over the next year to get more input and that those recommendations be published before any voting session...

The fee would be $34 for townhouse and condominium owners, $85 for owners of most single-family homes and $170 for owners of homes in rural areas...

In an email, Simonaire said he was passionate about the environment, although he voted against the state law. He noted that an investigation by The Capital last year found that most of the money raised through the Maryland Clean Water Fund went toward administrative costs and salaries.

“However, creating new taxes on rainwater and bigger government programs are not the way to solve the problem ...” he said. “I have little faith in the government effectively running another water fund.”

and even some Baltimore County politicians are less than  thrilled to be collecting more taxes.


Councilwoman Vicki Almond, a Reisterstown Democrat, questioned why the county has not held public hearings on the fee scale proposed by the administration of County Executive Kevin Kamenetz. The council is scheduled a vote on the proposal for Monday, but Almond wants to delay it a month.

Under a state law passed last year, jurisdictions with stormwater systems that feed into the Chesapeake Bay must impose the management fee on property owners to help fund projects to clean and protect the bay. Local governments can set their own fee structures. At a council work session Tuesday, members discussed concerns, including large bills that nonprofit organizations could face.

"Did we have any public meetings?" Almond asked Vince Gardina, the county's environmental chief. "Were there any stakeholders involved in this?"

Remember, stormwater abatement, as we know it now,  is by far and away the most expensive and least efficient form of pollution control in the Chesapeake Bay diet plan.  People are right to demand the best bang for their tax buck, even when it's being used to "Save the Bay": 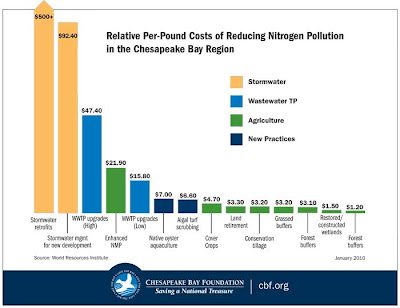