A Sad Note From a Friend

I received this in an e-mail newsletter from one of my fishing friends, "Walleye" Pete Dahlberg, a neighbor and friend, who happens to be a fishing guide on the Bay

"The Sun May be Setting On Our Striper Fishery"

Folks, anything I write here is strictly my opinion and facts of what I have witnessed over the last several years regarding our Striped Bass Fishery in Maryland and VA

I'm very sad to even think this stuff!!!!

Quick history of my time in this Striper fishery: Stationed at Andrews AFB, Aug 1995, fished for the first time on Chesapeake Bay in September 1995......chummed with some military guys at the Gas Docks....tons of fish in the chum, I pulled out a walleye bucktail and caught Stripers and Blues in the slick. I was hooked on light tackle for Stripers and Blues. I bought a Key West 19' Duel Console boat to fish the bay. 1996 I was all over the bay looking for opportunities. Didn't have to look far or hard. Breaking fish easy to find, Blues and Stripers all over the place. Fished the gas docks and power plant often and started looking in other areas like the eastern shore islands. For a few years I was fising with friends and having a ball catching on Chesapeake Bay.

Around Jun 1999 I fell into a position to obtain a MD Guide License. I had some extra cash so attempted to give it a shot. Obtained a MD Guide License and in April 2000 started guiding at the Susquehanna Flats and then down the bay after that season ended. I loved guiding and was hooked. Although still full-time military my passion was on the water. I met many great fisherman and learned lots from all of them.

I fished Dec. 2000 at the CBBT (Chesapeake Bay Bridge and Tunnel). I didn't know much about the "lay of the land" at the CBBT but managed to catch many, many fish on light tackle. Impressive numbers of fish over 34" on light tackle was had by all in the early 2000's. I maintain a detailed journal and had huge numbers of nice fish at the Susqy Flats and CBBT through 2004. I noticed numbers of large fish slipping a bit in 2005 and then things started


The Susquehanna Flats is at the northern end of the spawning area and migratory fish traveling up the bay have many rivers to run up before arriving at the flats. With a large number of migratory fish in the system my thought is plenty still make it all the way to the flats. As the numbers decrease less mass of migratory fish make it all the way to the flats. For the last several years very few numbers of truely large fish have been caught at the flats. Again, all this my opinion based on what I've witnessed and what other guides/charters have witnessed and related to me.

Along with the depletion of migratory fish it seems like what naturally will follow is less off-spring of migratory fish. The "bay" fish in the summer are the Stripers which don't migrate yet.....the younger fish. For several years now....(about 5 years), I've seen a big change in the numbers of "bay"fish in the summer months. When times were good with numbers of fish, Stripers would be caught from the Point Lookout region to north of the Bay Bridge all summer long. I have witnessed this range shrink hugely in the last couple of years and especially last year. The shrinkage in range can only equal less fish in a big way.


I'm no scientist or biologist or anything "ist". What I am is a guy who has spent 1900 days guiding fisherman on Chesapeake Bay from the Susquehanna Flats to the Chesapeake Bay Bridge and Tunnel over the last 10 years. I've been fortunate enough to have many great trips and actually make a living doing what I love.

I'm not blaming any one user group for the decline I've seen. All user groups are guilty of catching and the law is guilty of not changing to save our resource. History shows we (our state and other states) let the fishery get to such a bad point we had to have a moratorium. I wasn't here for that and don't want to be here for the second one. I truly hope the policy makers can see the writing on the wall and adjust quotas accordingly to save what we have and build on what we've got.

I know politics are huge in Maryland/VA ect........I know some folks depend completely on harvesting Striped Bass for a living.......when you have folks on both sides of the fence tugging back and forth over decisions it isn't easy! I hope and pray we can make decisions based on facts and the obvious, Striper fisheries sliding horribly downhill all up and down the coast. The writing is all over the wall.........we have to make tough decisions soon or the sun will set......it'll be over! 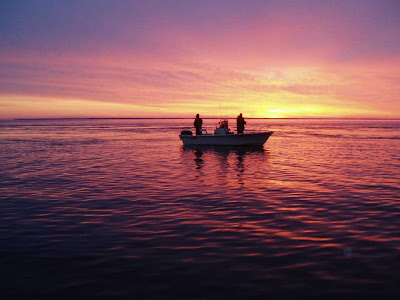 Incidentally, the 19 ft Key West he refers to in the third paragraph is my current boat; I bought it from Pete when he first set out to become a guide back in 1999.

Sadly, I have to agree with Pete on the state of the Chesapeake Bay striper fishery.  It is in decline, and  if something isn't done soon only drastic action, likely another moratorium, will be sufficient to bring it back.