When 8th grade Jared Marcum got dressed for school on Thursday he says he had no idea that his pro-Second Amendment shirt would initiate what he calls a fight over his First Amendment rights. "I never thought it would go this far because honestly I don't see a problem with this, there shouldn't be a problem with this," Jared said.

It was the image of a gun printed on Jared's t-shirt that sparked a dispute between a Logan Middle School teacher and Jared, that ended with Jared suspended, arrested and facing two charges, obstruction and disturbing the education process, on his otherwise spotless record. 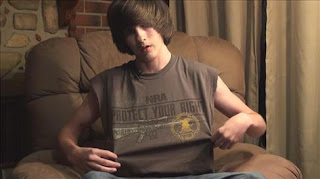 My guess is that he got into a verbal confrontation with a violently anti-gun teacher, and much of this is the teacher's revenge on him.  Remember, it's not really about the guns, it's that that the people who want to ban guns want to punish the people who like them.  She'll probably be happy if she manages to drive Jared out the school.

Jared's father Allen Lardieri says he's angry he had to rush from work to pick his son up from jail over something he says was blown way out of proportion. "I don't' see how anybody would have an issue with a hunting rifle and NRA put on a t-shirt, especially when policy doesn't forbid it," Lardieri said.

The Logan County School District's dress code policy prohibits clothing that displays profanity, violence, discriminatory messages and more but nowhere in the document does it say anything about gun images.

So as of now, the Logan County Schools can make up rules on the fly with no notice and have the police enforce them with criminal penalties?  I have no doubt, that in the long run (and it may be very long depending on where this is, and who the courts are) that the courts will hold that the school had no right to dictate what message could be sported on Jared's T-shirt.  The courts have already decided in the past that pro-drug and alcohol, anti-war, and shirts insulting to presidents are protected under the first amendment.  It's hard to imagine even Obama's appointees going back on these decisions.


"He did not violate any school policy," Lardieri reiterates. "He did not become aggressive." Now, Lardieri says he's ready to fight until the situation is made right. "I will go to the ends of the earth, I will call people, I will write letters, I will do everything in the legal realm to make sure this does not happen again," Lardieri said.

Logan City Police did confirm that Jared had been arrested and charged today.

It ain't education; it's mind control.  they hope they can destroy any support for the Second Amendment by making it  it painful and troublesome to support, using the strength of the educational bureaucracy.