Everyone has had that experience where you read something in the paper that you know something about, and the reporter just has some really amazing basic error, the error that makes you wonder how much they know about all the stories they write (not much in most cases).  This is one of those.  I did a screen capture to catch the error, just on the off chance that someone tells them, and they go to surreptitiously erase the evidence: 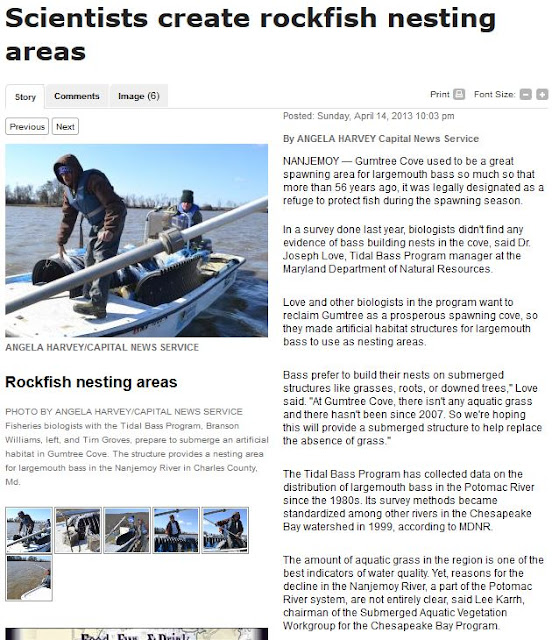 The error?  Actually read the entire article and you will see that the entire written article talks of restoring habitat for Large Mouth Bass, while the headline clearly claims that they are creating nesting areas for Striped Bass, which is never mentioned in the article.

Largemouth Bass (Micropterus salmoides) is a basically fresh water gamefish that does inhabit the upper end of estuaries, where as Striped Bass (Morone saxatilis) is basically an anadromous marine fish, that spend most of it's life in salt water, but spawns in fresh or very lightly brackish waters (although they have been transplanted to freshwater lakes, where they do very well, thank you).

Is it really too much to ask newspaper to get their simple facts straight?  In this, the reporter clearly got the facts right, but the headline writer (editor?) just made up the headline without consulting the author.
Posted by Fritz at 1:22 PM