Give Me a Child Until He is Seven...

... and I will give you the man
Wrote Francis Xavier, the co-founder of the Jesuit Order. The implication is that the best opportunity to indoctrinate a person in a lifetime of belief and devotion to religious dogma is when they are young.

Dad Furious After Finding This Crayon-Written Paper in Florida 4th-Grader’s Backpack: ‘I Am Willing to Give Up Some of My Constitutional Rights…to Be Safer’


The words are written in crayon, in the haphazard bumpiness of a child's scrawl.

"I am willing to give up some of my constitutional rights in order to be safer or more secure."

They're the words that Florida father Aaron Harvey was stunned to find his fourth-grade son had written, after a lesson in school about the Constitution.

Aaron Harvey's son wrote as part of a school lesson, "I am willing to give up some of my constitutional rights in order to be safer or more secure." TheBlaze has redacted the child's name.

Harvey's son attends Cedar Hills Elementary in Jacksonville, Fla. Back in January, a local attorney came in to teach the students about the Bill of Rights. But after the attorney left, fourth-grade teacher Cheryl Sabb dictated the sentence to part of the class and had them copy it down, he said. 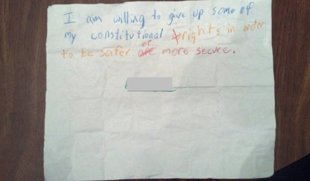 <sarc>It's just a normal part of every elementary school education; teaching children that to be good citizens they have give up their constitutional rights and submit to the authorities.

I'm sure it had nothing at all to do with the current gun grab controversy. I'm sure they were preparing children to to be told that gays wouldn't have the right to marry. </sarc>


She said the principal had fielded one parent's concern about the lesson in January, but it wasn't Harvey. She said Thursday the district and principal were "checking into" what had happened.

Harvey, rather than asking the school for answers when he found the paper, wrote his concerns in an email, which was then forwarded to TheBlaze. He said he did it that way because he wasn't sure he would have gotten a straightforward answer if he asked the school directly.

Good for him. Continuing to work through the school would have allowed them to bury the issue.  The teacher  needs to be penalized.  If that violates her First Amendment right to say as she pleases, I'm sure she'll understand that it's for the greater good.