Anthony Weiner admitted in an interview Wednesday that there might be other embarrassing photos of him out there that have yet to surface.

In the one-on-one with RNN-TV, Weiner didn’t deny that there was a possibility there could be other photos like the one that led the former congressman — who is now attempting a comeback — to be disgraced, and ultimately forced to resign in 2011.

Lest someone accuse me of being partisan (guilty as charged), to show that both parties have their pervs I offer this bit bit from The Other McCain:


Adam Savader, a former intern for Paul Ryan, was arrested by the FBI and charged in a weird sexual extortion scheme:

And shockingly enough, many of them actually had already nude pictures on the net... 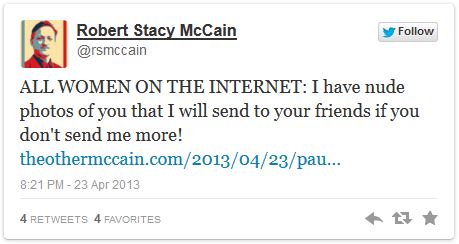 Stacy, don't stoop to such depths, just go with your own weekly Rule 5 posts.  Most of them are better than random women off the net anyway.

It must be a new rite of passage for women to put nekid pictures on the net.