Sea Level Not Rising to Scare Level in Delaware

We at the Positive Growth Alliance generally believe it’s best not to argue with folks who buy ink by the barrel. Nevertheless, we must respond to the recent article by Don Flood in Cape Gazette.

On March 18, the Positive Growth Alliance, along with the Caesar Rodney Institute, hosted a seminar attended by approximately 250 people. Two highly qualified scientists, Dr. Willie Soon and Dr. David Legates, explained in scientific terms that the extremely high levels of global warming and sea level rise that Delaware’s government is currently predicting is almost surely not occurring. You can see the slides they used in their presentation at www.positivegrowthalliance.org.

Drs. Soon and Legates both have interesting resumes.  Soon works at the Smithsonian-Harvard Astronomical Observatory, and has published many peer reviewed papers casting doubt on the importance of CO2 in global warming, favoring a solar explanation.  Dr. Legates was State Geologist of Delaware until he made anti-global warming statements.  He was fired by Gov. Ruth Ann Miner, who cited his views on global warming.  Both have been viciously attacked by the global warming community.

First, whether or not we’ll have rapid sea level rise totally misses the point. The critical question should be, what actions should we take in response and who will make the decisions?

The Positive Growth Alliance believes that special interests are using fear of manmade global warming to exert more and more control over citizens. Local property owners understand this threat. A few years ago, we helped publicize a DNREC attempt to move the beach building line inland so far that it would have prevented many from rebuilding after a big storm. The result was a massive protest by beach property owners and legislation that prevented the DNREC action. 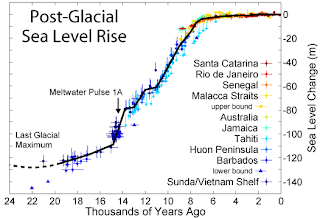 Indeed, and I have made this point often.  No matter what the problem, the solution always seems to be more governmental control, and less property rights for the citizens.


Mankind has been dealing with sea level rise since the beginning of civilization. After all, during the last ice age 20,000 years ago, the ocean beaches were 70 miles or so farther east. The water has been rising ever since.

A much bigger factor, however, is erosion. Erosion is a natural, everyday process that mankind has been fighting for centuries. Sharps Island, in the Chesapeake Bay, near the mouth of the Choptank River, once had hundreds of inhabitants. It disappeared around 1900. The Cape Henlopen lighthouse, once nearly a mile from the bay and 250 feet above sea level, collapsed in 1926. While sea level rise may have played a small part, erosion was the much larger factor.

Again, precisely on point.  We aren't losing land in the Chesapeake Bay to sea level rise, we are losing it to erosion at the edges.


Some would cite sea level rise for the damage that hurricane Sandy did to the new inlet bridge. How is that even possible? The bridge just opened this past summer! Is anyone suggesting that sea level rise is so unpredictable we can’t protect ourselves from it over a span of months? Did someone forget to tell the engineers that a bridge had fallen into the ocean in that same general location in 1948?

We must not allow ourselves to be so easily manipulated! After all, the greatest flooding on the Delaware coast occurred during the Storm of 1962. That was 51 years ago! What if today’s big government mindset had existed at the time of that great storm? The vast majority of homes and businesses in Delaware’s beach communities have been built since 1962. What if government restrictions had prevented that?

Obviously, drastically restricting supply would have allowed the truly wealthy to drive beach real estate prices much higher. Taken to extremes, most middle class and even upper middle class folks could have been excluded from the beach areas.

The rich have theirs and will continue to be able to get access to it, but by raising the prices and restricting the access they can keep out the rabble.

Would stopping building in the beach areas have provided a benefit? It’s hard to see how. Flood insurance claims have been, and continue to be, extremely low. Since the federal flood insurance program started in 1978, every claim ever made through 2010 in Sussex County could be paid with just one year and two months of premium! In addition, the Sussex County economy would have lost one of its biggest economic drivers.

To summarize, the Positive Growth Alliance believes the public is being manipulated. Fear of manmade global warming and sea level rise is being used as the motivator.

The special interests are counting on the gullible to demand controls on our own lives that will limit our choices. We’re already seeing the effects in fuel prices, electricity prices, car prices and even boat prices, along with many other areas not so apparent.

It would be so much easier for them if we'd all just stay home on watch propaganda on the approved channels. 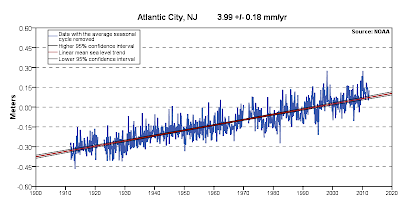 Fortunately, for those of us who value American traditions of liberty, the majority are no longer buying it. According to the latest Gallup poll, 43 percent of Americans now believe the effects of global warming are being exaggerated, while only 29 percent think they are being underestimated.

As Drs. Soon and Legates said, there is no question that some sea level rise is occurring. The real question is, do we need to surrender control of our own lives because of it? Our answer is no. We would like government as a partner, not as our master.

There's simply no evidence that sea level rise is increasing at this time.
Posted by Fritz at 5:00 AM