About the only interesting news in the Chesapeake Bay News today is the number of article published from the point of view of pushing back against the perceived unfairness of the recently passed 'Rain Tax', the tax on impermeable surfaces (buildings and pavement) aimed to raise money to combat storm water runoff.

Leading off the list of articles, this one from George Soros (felon- France) funded Media Matters castigating, you guessed it, Fox News for taking up the plight of those forced to pay the 'Rain Tax.'
Raining On Fox's Tax Parade - The "Rain Tax" That Never Was


Fox News is attacking a new Maryland anti-pollution measure as a "rain tax," adopting the misleading frame of local politicians. But the program doesn't tax rain -- it taxes surfaces that lead to more pollution in the Chesapeake Bay, a vital ecosystem that generates major revenue for surrounding states.

Yes, we knew that George, every bit of news I've seen on this tax, including the reports on Fox, have added that little disclaimer, and yet the term 'Rain Tax' seems fair as it is levied based on the amount of surface that rain cannon penetrate, and is aimed at ameliorating storm water issues.

The only other thing interesting about this polemic is that it puts a price tag on Chesapeake Bay:


A 2004 update of a 1989 University of Maryland study estimated that the Bay is worth more than $1 trillion including fishing and recreation revenue. More recently, NOAA estimated that Maryland and Virginia saw $268 million in commercial fishery catches in 2011 alone, and the U.S. Fish and Wildlife Service has estimated over $535 million in annual expenditures related to recreational fishing just in Maryland.

Could it be that George intends to buy the Bay, lock, stock and barrel and ruin it himself, like he did with the democrats and the European currencies?

A somewhat more local focus is in evidence in the article from the Sun:

Ridiculed by some as a "rain tax" and a symbol of government overreach in taxes, storm water management fees mandated by the state were approved Monday by Baltimore and Anne Arundel counties. The Baltimore County Council approved its fee structure 5-2, along party lines, with Republicans David Marks of Perry Hall and Todd Huff of Lutherville voting against it. The Anne Arundel County Council voted 4-3 to approve its version of stormwater fees.
...Last year the state legislature mandated a fee to pay for projects that will benefit bay water quality. Ten jurisdictions, including Baltimore City and Baltimore, Howard, Anne Arundel, Carroll and Harford counties, must establish a stormwater fee structure by July 1. The state law exempts government-owned properties from the fee.

Of course, it does; why bother to have the tax suckers pay taxes?


Before Monday's vote, Marks said he had heard frustration from people "across the political spectrum" about fees and taxes. "Maryland is becoming known as a state that just taxes everything that moves," he said. "There's just raw anger about the number of taxes that are going up in the state."

Yes, Maryland taxes are either abominable, or fantastic, depending upon your point of view.  But we're only #4, so I'm sure with a little push, we can make it to #1, though to be sure, Connecticut, New York and New Jersey are strong opponents.

Heartland Institute, a generally right of center think tank, has this: Homes, Businesses to Pay ‘Rain Fees’ In 9 Maryland Counties 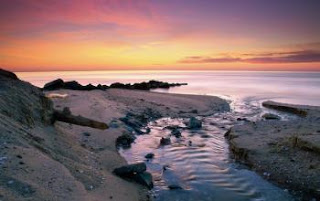 Despite a Republican filibuster attempt in the Senate, the Maryland General Assembly has passed legislation that would implement a stormwater pollution fee to raise revenue to clean up the Chesapeake Bay.

Approved by the Senate and House of Delegates minutes before the end of the legislative session, HB987 requires nine counties and Baltimore City to establish a watershed protection and restoration program.

Senate Republican Leader E.J. Pipkin proposed 12 amendments, none of which were adopted. Pipkin said the bill was essentially an attempt to tax rain water.
...
Republicans, who have labeled the bill a $6 billion tax on counties based on the projected funding needed over 13 years, launched prolonged debate of the bill by proposing a number of unfriendly amendments.

At least they sported.a pretty sunrise or sunset picture of 'stormwater' running into the Bay. 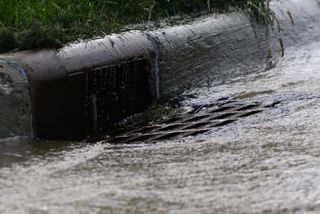 And last, but not least, the Bay Foundation had this gem in their blog: The Truth about the "Tax on Rain".  They chose a nasty black and white photo of water running into a storm drain to illustrate.


A “tax on rain?” Try: “investments in local health and jobs.”

Some critics have mocked the fees as a “tax on rain” or a “driveway tax” because they are often based on how many square feet of blacktop and other hard surfaces exist on a property. The more blacktop, the more toxic stormwater rushes off a property during rain storms to pollute nearby streams and Chesapeake Bay.

But instead of only focusing on the costs of stormwater pollution control projects, we should also look at the benefits –- such as better health for fish, oysters, crabs, and even people. In many areas of Maryland, public health officials warn everyone not to swim 48 hours after a rain, because stormwater flushes bacteria from dog waste, failing septic tanks, and many other sources into local swimming beaches. With better stormwater pollution control systems, our children won’t risk an upset stomach or trip to the doctor’s office just for playing in the water at the wrong time.

Stormwater control projects also create jobs for construction workers and engineers. Montgomery Country, for example is using a stormwater fee to invest $305 million in local construction projects, including the rebuilding of urban streams to reduce erosion, and the digging of roadside ditches full of wetlands plants that absorb and filter rainwater. The result is the hiring of 3,300 workers in Montgomery County. And more than 178,000 full-time equivalent jobs are projected across the Bay region over the next five years as more counties build stormwater control systems to meet EPA pollution limits for the Chesapeake and state Blueprints for cleaning up the Bay.

Clearly, they're not much for the "broken window fallacy" kind of thinking.  Imagining that all taxes that get taken and go toward fixing "something" are net job creators is a pretty common failing.  If taking 6 billion is so good, would not taking 60 or 600 billion be better?  Imagine, we could create the equivalent of 17.8 million full time jobs!  Numbers are great, aren't they?

Anyway, I'm just grateful that Calvert County is not on the list.  As I have said before, the one good thing about this tax is it falls heavily on the metro regions, who voted heavily for the people who implemented this scheme.  There's some poetic justice there, which I'm sure they will fail to see.
Posted by Fritz at 7:07 PM