Underwater grasses in the Chesapeake Bay declined more than 20 percent last year, according to scientists. It was a blow to many fish as well as other species that need the grass to live or breed. Underwater grasses create meadows of sorts beneath the surface; those areas are where all kinds of creatures like crabs and striped bass live and breed. Last year, some 17,000 acres were wiped out.

Scientists with the federal Environmental Protection Agency's Chesapeake Bay Program survey bay grass levels annually; they say bay grass coverage has now dropped to its lowest point since 2006 and is at historically low levels. The researchers blame extreme weather: heavy rains and snow melt sent tons of mud and debris into the bay last year, and record setting summer heat killed off many acres as well.

I really don't recall last year being that awful by comparison with other recent years, but maybe that just means I've spent too much time blogging and not enough time fishing.  Well, there was that pesky "Superstorm Sandy", but I thought it was kind of a dud for impact on the Bay, at least compared to Hurricane Irene and Tropical Storm Lee in 2011.

Here's a graphic from the EPA Bay Program to put it into perspective: 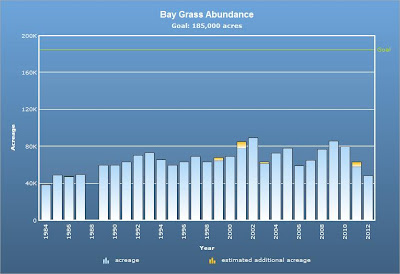 Not a lot of progress toward the goal of 180,00 acres of SAV the Bay Program has set as the goal for two years ago.
Posted by Fritz at 7:17 PM