'It's 99% certain there is life on Mars': Shock finding as scientists re-analyse soil samples from Seventies Viking lander


In July 1976, the Viking 1 probe touched down on Mars and failed to find traces of life - but now, three decades later, scientists think the experiment was flawed. Viking 1 did find evidence of extraterrestrial microbes in soil samples from the Red Planet.

Mathematical analysis of the samples concluded that salts in the soil on Mars 'threw off' initial estimates - and that the soil samples show strong evidence of microbial life.

The new analysis looked for 'complexity' in the samples - an indication of life. To the surprise of the scientists, they found it.

I suspect this is a minority position among the astrophysicists who study Mars. It's a planet.  They're "complex", even without life.  Life on earth "surfs" on the complexity of the planet.  Organisms hijack the energy and chemical gradients that already exist for their own purposes, largely reproduction.  Almost anywhere a difference in energy or a chemical gradient from which any energy can be extracted has been exploited by life.  Life cannot create those gradients, except by degrading other gradients or inputting energy  (First and Second laws of Thermodynamics).  The main source of external energy is sunlight, and with it, organisms have created the world we know. 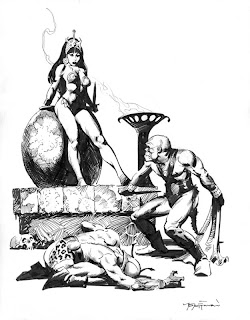 The reassessment was prompted by the discovery of 'perchlorates' in the soil at the landing site of another Mars lander, Phoenix, in 2008.

The presence of the chemicals in Viking's samples had led scientists to conclude the samples were contaminated.  The scientists behind the experiment remain divided over how conclusive the evidence for life on Mars is. Christopher McKay of Nasa's Ames Research Centre said, in an interview with Discovery News, 'Finding organics is not evidence of life or evidence of past life. It's just evidence for organics.'

'The ultimate proof is to take a video of a Martian bacteria. They should send a microscope — watch the bacteria move,' said Josheph Miller of USC's Keck School of Medicine.

Color me skeptical, but willing to look at new evidence.  It's a good enough excuse to put up a few more "Edgar Rice Burroughs" Mars art..