The sun may be entering a period of reduced activity that could result in lower temperatures on Earth, according to Japanese researchers.

Officials of the National Astronomical Observatory of Japan and the Riken research foundation said on April 19 that the activity of sunspots appeared to resemble a 70-year period in the 17th century in which London’s Thames froze over and cherry blossoms bloomed later than usual in Kyoto.

In that era, known as the Maunder Minimum, temperatures are estimated to have been about 2.5 degrees lower than in the second half of the 20th century.

The Japanese study found that the trend of current sunspot activity is similar to records from that period.

Others have been saying the same for some time.  Search on "maunder" and you'll find several posts on this blog about the ongoing weakening of the sunspot cycles, and how it may presage a cooling climate similar to that of the "Maunder Minimum": 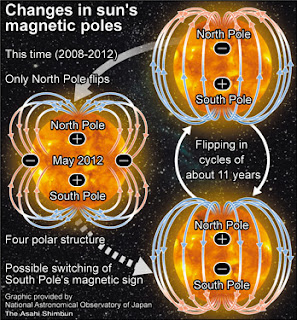 But it is news that the meme is spreading.  Moreover, the Japanese make a specific prediction regarding the suns weakening magnetic field that will be falsifiable, and relatively soon:

While scientists had predicted that the next flip would begin from May 2013, the solar observation satellite Hinode found that the north pole of the sun had started flipping about a year earlier than expected. There was no noticeable change in the south pole.

If that trend continues, the north pole could complete its flip in May 2012 but create a four-pole magnetic structure in the sun, with two new poles created in the vicinity of the equator of our closest star.