But Where Are the Rod Holders? 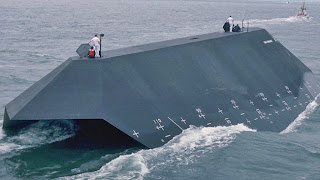 Just $50,000 will get you the ship that inspired the radar-evading vessel that was the base of evil media mogul Elliot Carver in the 007 film Tomorrow Never Dies.

Although it's likely to go for a bit more than $50K. The Sea Shaadow cost the US Defence Department - or more specifically, its research arm DARPA - a whopping $195 million to develop. 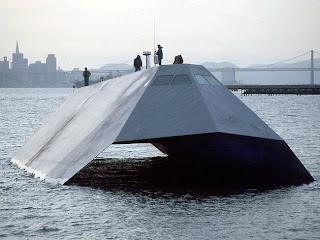 That was back in 1984, but the world didn't see the Sea Shadow for nine years. That's because it was loaded with the type of stealth technology that made the US Air Force's F-35 Lightning II so famous.

So, what do you get when you buy a $195m stealth ship from the US military?

Apart from the fact that it looks like the kind of thing the inventor of the word "awesome" was looking at when he first said "awesome", not a lot.

Because sadly, you have to scrap it.

"The ex-Sea Shadow shall be disposed of by completely dismantling and scrapping within the USA," the description on the sale item reads.

"Dismantling is defined as reducing the property such as it has no value except for its basic material content."

Can you imagine showing up at the nuclear power plant in that?