Cool and Crisp at the Beach 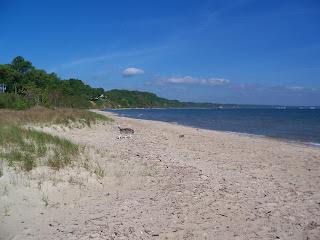 After the passage of the front that soaked Trevor and I last evening, today's weather came clear and cool.  It was only about 50 F when we started our walk, but the breeze was slight, and the Bay had only a light chop. 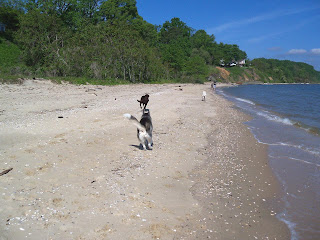 We met one of our neighbors, his son and his two labs on the beach.  The dogs all got along fine (after Skye growled a little to attempt to assert her dominance - they ignored her). 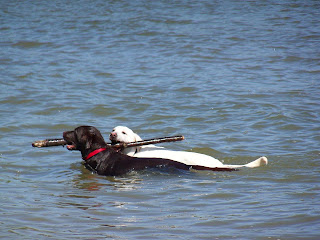 The labs do labby things, like fetch sticks.  Skye doesn't fetch. If you throw it, she figures you don't want it.  Sometimes she will deign to try to intimidate a dog to drop it's toy, but then she doesn't really want so she drops again quickly.  Huskies; built to pull sleds and not ask too many questions. 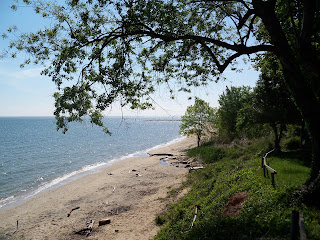 The tide was high, so on the way north we had to climb the stairs and go through Calvert Beach.  Looking south from the top of the beach steps. 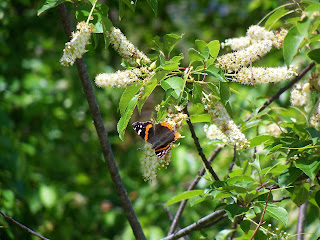 There were a bunch of these butterflies out today.  Last night a couple of them were hanging around the boat, but today on the beach they were everywhere.  They appear to be "Red Admirals", Vanessa atalanta.  I also noticed them today in the garden, but they weren't nearly as abundant as on the beach. 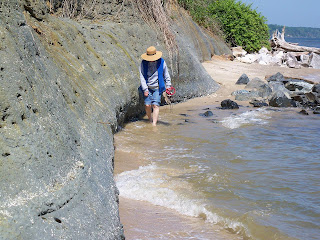 On the way back south, we waded through the shallow water at the narrow spot; Skye was happier to stay off leash (most of the time).  It was a decent fossil day today; we found 48 shark's teeth (mostly pretty small), a drum's tooth, and some ray plates, bringing the final total for April to 196 shark's teeth. 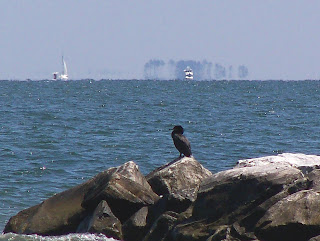 A cormorant resting on the jetty, with mirage distorting James Island and a couple of boats in the distance.
Posted by Fritz at 5:00 PM