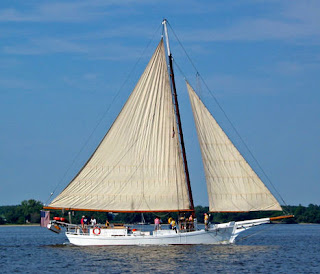 
A remembered past meshed with a hoped-for future on April 15, when a historic fishing boat set out from Cobb Island on its first journey since its renovation.

Aboard the restored skipjack were more than two dozen watermen, there to learn how to harness tourism to stay on the water as fisheries decline and regulations increase. The bay’s poor health threatens one of the state’s oldest industries and the people who practice it, working the water for oysters and crabs as well as rockfish, menhaden and other finfish.

The skipjack is the the traditional sail vessel used to harvest oysters in Chesapeake Bay.  At some point along the way, dredging off a vessel under power was made illegal as a conservation measure (making it harder to catch oysters made them catch less).

Several skipjacks around the Bay have been converted to tourist vessels.  I have yet to ride one. I doubt I would, unless it were free or exceptionally easy; I've had enough hours on the Bay on both power boats and sail boats of all sizes that I don't need another.  And God knows, I don't need a lecture on oysters from an old waterman.

I do wonder if there is enough tourist market to support many more such operations.  But, options are becoming limited for watermen who want to stay on the water; the fishery isn't going to support many skipjacks. (IMHO it should support none, given my long standing belief that oysters need at least a 5 year moratorium).
Posted by Fritz at 7:41 PM