I Wonder Where He Got the Idea He Could Disrespect Her 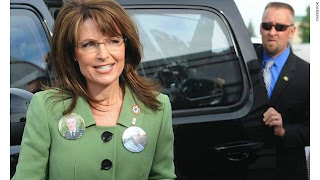 Governor Sarah Palin's finding herself right, smack in the middle of the Colombian Secret Service scandal. Now, how could that be? Well, The Washington Post reporting one of the agents booted from the agency was part of Governor Palin's vice presidential security team in 2008. That agent is David Chaney.

Now, he posted pictures on Facebook of himself and Governor Palin in 2008, writing comments like, "I was really checking her out, if you know what I mean."

Of course, the answer is the absolutely abominable treatment that Sarah Palin received at the hand of the press and the entertainment industries made it pretty clear to every one that she was fair game for all.

Sarah was not above a little schadenfreude:


Well, this agent who was kind of ridiculous there in posting pictures and comments about checking someone out. Well, check this out, bodyguard. You're fired. And I hope his wife kicks his ocoli and sends him to the doghouse, as long as he's not eating the dog, along with his former boss.

I would call that a fair shot.