A cool article by Jay Leno on the first true hybrid car manufactured and sold in the US, the 1916 Owen Magnetic: 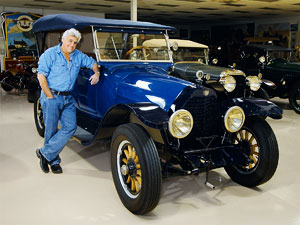 People think hybrids are something new, but they've been around since the beginning of the automobile. Ferdinand Porsche built the Lohner-Porsche series hybrid car back in 1901. It used a gas engine to spin a generator that fed electricity to in-wheel motors. In 1917, the Woods Motor Vehicle Company of Chicago offered the Woods Dual Power, a series hybrid that could motor along—at speeds of less than 15 mph—solely on battery power. But I think the 1916 Owen Magnetic might be the most interesting early hybrid of them all.

The Owen Magnetic's technological leap was its electromagnetic transmission. Invented by the wonderfully named Justus B. Entz, an electrical engineer from New York who once worked with Thomas Edison, the electromagnetic transmission compactly housed both a 24-volt generator and an electric traction motor. The crankshaft of a 75-hp gas engine was attached to the generator, which sent juice to the traction motor, which in turn powered the rear wheels. There was no mechanical connection between the engine and the drivetrain.

It appears to have been a pretty advanced car for the time, and maybe that was it's downfall:


So why did the Owen Magnetic company fail in 1922, after producing just 700 cars?

The ads called it the car of a thousand speeds. But as is sometimes the case, being better isn't always enough. The car had to be competitively priced. A 1917 Ford Model T cost $360; Cadillacs ran about two grand. An Owen Magnetic started at $3700 and went up from there.

Another problem was the complicated relay-and-wiring shift mechanism. It's mounted under the hood alongside the steering column. I haven't opened mine up because it seems to work fine. And, quite frankly, I'm frightened to poke around in there. A plate on it says, "If something goes wrong, do not attempt to work on this yourself. Send it back to the factory." Who would want a car that a blacksmith couldn't fix?

So basically, it was a old time Fisker, without the government subsidy to keep it alive.  Ford made a car that everybody could afford, and most of them could afford to have fixed.
Posted by Fritz at 7:50 PM