US Dietary Guidelines - "No Scientific Basis" 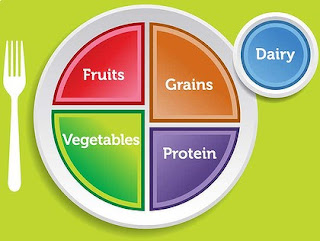 A few weeks ago, the US Department of Agriculture a new visual aid to the suggested diet for US citizens (no, it doesn't have the force of law, yet...), based on a recent report by USDA.

A member of the task force charged with making that study was in Israel giving a lecture on the US process for making dietary guidelines and had this to say:

"There is no scientific basis for the U.S. Dietary Guidelines."

Joanne Slavin, PhD, RD, professor of Food Science and Nutrition at the University of Minnesota, was the head of the Carbohydrate Committee and on the Protein sub-committee for the 2010 Dietary Guidelines Scientific Advisory Committee. She was invited to be one of the guest speakers at The 9th Conference on Preventative Nutrition in Tel Aviv, Israel on May 18, 2011. Perhaps Ms. Slavin felt more at liberty to express her true feelings about the final version of the 2010 Dietary Guidelines being overseas and didn’t realize that I’d have eyes and ears listening in to what she had to say. But according to my source who was in attendance to hear her speech, you could tell she had an obvious discontent with the nutritional recommendations that are now being thrust upon Americans. 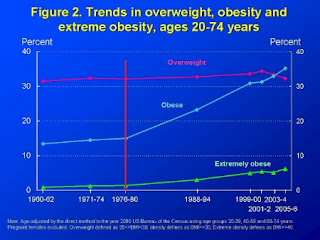 OK, that might be a little harsh.  Surely, at least the things on the new plate are at least food, and mostly wholesome.  But do we really need the government to tell us how to eat?  They having been doing so since about 1980; so how is that working out?  Dr. Slavin provided the data to evaluate the results of the governments efforts to get us skinny.  See the graph on the right.

Apparently, the governments efforts to tell us how to eat have coincided with a distinctive increase in obesity.

Of course, it's difficult to know what would have happened had the government not pushed a high carbohydrate, low fat, and low protein diet on the populace, but the results to date are suggestive that it may, in fact, have been counter productive.  It's almost like the government was more interested in satisfying it's clients in the agriculture industry than in our health...
Posted by Fritz at 7:56 PM