Georgia and I went in to Washington D.C. today for a "late career/pre-retirement" seminar.  Seminar was OK, mostly stuff we knew, but a general affirmation of our plan.  We had an hour off for lunch so we walked a couple blocks to the American Indian Museum, as we had heard they had good food at their cafeteria.  Maybe, but not for cheap.  Their "Buffalo Burger" was an expensive, and rather tasteless hamburger, and Buffalo Chile was also expensive and ordinary.  We spent a few brief minutes looking around the museum: 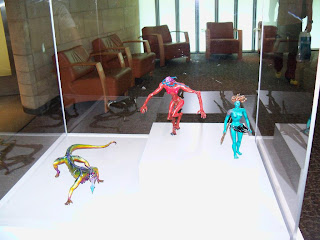 This was an exhibition in the Native Hawaiian area.  An exhibit by a "modern artist", they appear to be well made children's toys, with boobs.  Not that there's anything wrong with that. 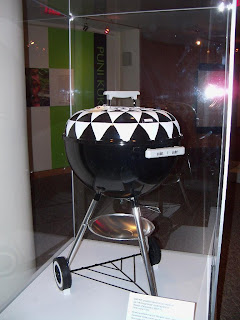 Another exhibit at the Hawaiian section.  Supposed to be an in jest look at what modern Hawaiians will leave behind for archaeologists of the future to find 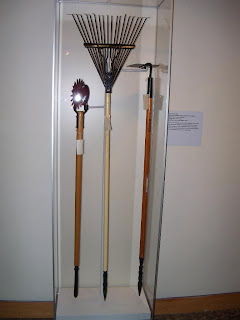 Another one in that exhibit.  So far, I'm not impressed with the quality of the exhibits, or the thoughts behind them. 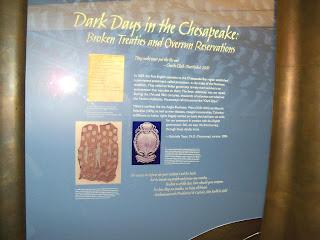 OK, here we are, in the section on the Indians of the Chesapeake Bay.  Of course, the tone is one of "bad white guys/poor Indians."  For all the truth there, it's a familiar story across history, a stronger culture invades, and subdues a weaker one. Don't like it?  Don't be the weaker culture. 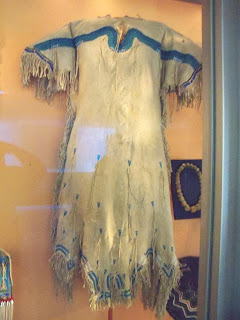 A little traditional museum stuff.  A nice beaded doe skin dress.  Overall, the museum had the feeling of a big, modern, artsy building, with a tremendous amount of empty space.  I would prefer a small country museum, where all the trash is on display in close confines, and there's less politicization of the displays. A piece of a wall sized mural.  Kind of a nice design, not dissimilar from many we saw in Australia. 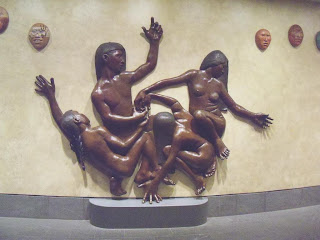 A mid-relief (mezzo-rilievo) sculpture on the wall near the entrance.
Posted by Fritz at 11:08 PM

Email ThisBlogThis!Share to TwitterShare to FacebookShare to Pinterest
Labels: Georgia, Me, photography, politics