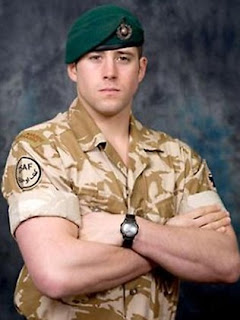 Soldier killed in Afghanistan had $150,000 in insurance to send his best buds to Las Vegas


David Hart, 23, a Royal Marine took out a $380,000 insurance policy before deploying to Afghanistan. Then he wrote a letter saying, should he not live to make it back home, $150,000 of the policy’s proceeds would go to send 32 of his his friends and their girlfriends on a vacation to Las Vegas, Nevada. He died more than a year ago, and now those friends are preparing for a holiday in his memory.

Hart died in Helmand Province. He also left $76,000 to a charity for injured Marines and a “large sum” to his family, who will take part in a bike ride fundraiser for the Royal Marines Charitable Trust Fund in September.

John 15:13 says: "Greater love hath no man than this, that a man lay down his life for his friends."  This guy seems to seen John, and raised him a Vegas vacation.
Posted by Fritz at 5:00 AM