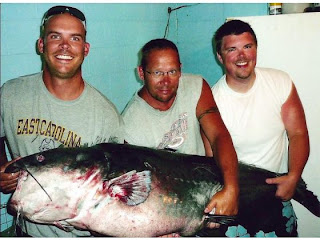 A 143 lb Blue Catfish was caught last weekend at in Kerr Reservoir (aka Buggs Island Lake), on the North Carolina, Virginia Border.  The lake is an impoundment on the Roanoke River, which flows into Pamlico Sound, south of Chesapeake Bay.


Richard Nicholas Anderson caught the 143-pound, 57-inch fish near Goat Island after a 45-minute battle from a pontoon boat.

The fish, with a girth of 43.5 inches, was weighed at Mecklenburg Supply Inc. in Chase City with two representatives from the Virginia Department of Game and Inland Fisheries observing.

If the International Game Fish Association certifies the catch, Anderson's fish will easily top the new world mark of 130 pounds for a blue catfish caught in the Missouri River in 2010.

Much like their presence in some Chesapeake Bay tributaries, Blue Catfish are introduced species in the Roanoke. As is the Chesapeake, whether they are a benefit or a curse depends on the point of view of those you ask.  Some fisherman have made a fishery of targeting the big catfish and have made places where big Blue Cats can be found a destination for charter trips.  On the other hand, many fisheries scientists consider them to be a damaging invasive species; a voracious predator and a competitor potentially capable of pushing out the native catfish.

Another article suggests that nutrient pollution maybe responsible for growing the giant catfish:


Kerr Reservoir (aka Buggs Island Lake), like the James River, is an altered system. We humans have changed our waterways greatly in the past 100 years by increasing the nutrient load they carry.

"On Buggs Island, it's upstream agriculture," Greenlee said. "On the James, it's agriculture and municipal inputs that together are driving a very high level of productivity (i.e. total biomass). These systems are much, much more productive than they were if you went back to pre-colonial days."

The converse is true, too, he said. "Smith Mountain Lake is an example. Once you started cleaning up the municipal discharge, that productivity has dropped down as a result of the reduced nutrient levels."

On Buggs Island Lake, DGIF head fish biologist Gary Martel said "you have a combination of a new reservoir situation and a much more abundant food source. You see the highest probability of some of those records occurring in bodies of water where the (predator) populations have just become established."

No one knows for sure how they got there, but blue catfish showed up in Buggs Island Lake in the late 1980s. That's not a long time in fish years. Blue cats can live 25 years. So the first, longest-lived blues are just now beginning to turn over. And for the past quarter century, they've had the benefit of our increased nutrient input boosting populations of their favorite food: shad. It's been a 25-year buffet for blue catfish in Buggs Island Lake.

It's possible I suppose, but their native drainage, the Mississippi River system, is not exactly pristine either, so one would expect to see equally big catfish there as well, and indeed, previous records of nearly the same weight (124 lbs) have come from there.  I suspect rather, that it's just that the first major cohorts of catfish in the new waters are finally reaching their full size, and fishermen are just learning to target them.  Once fishermen learn to target the big ones more efficiently, the top to the size distribution will get knocked off, and it will be hard to catch another record.

My previous post on Blue Cats here, including my own not nearly so big Blue Catfish.
Posted by Fritz at 7:14 PM