It's Revenge for Giving Us Nutria 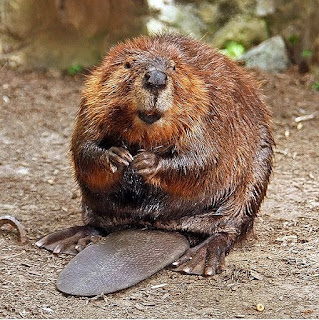 A front page article this morning in today's Washington Post concerns the problem that Argentina is having with an invasive species, the Beaver.  Most often we're concerned about invasive species coming from abroad, making it's way into our ecosystems and disrupting them, like the Northern Snakehead,  Nutria, Starlings, the English (or House) Sparrow, best known for eating at McDonalds.  However, our our own native species have the same potential to go native in other places, and cause disruption.  In this case the Beaver (Castor canadensis) was introduced to the islands at the southern tip of South America, Tierra de Fuego, where they found a place much like their homeland in North America, and began doing what Beavers do, cut down trees, build dams and lodges, flood areas to make ponds, and make more beavers.

And now, they have swum the Straits of Magellan to the shores of continental South America, and are on a slow march up the continent.  I guess the only question is how far they'll get.  If they can stand the tropics, will they get into the rain forests?

And as in North America, man's relationship with the beaver is tenuous at best.  In early America, the landscape was heavily influence by Beavers.  Given the opportunity, and lots of brush and small trees to eat, Beavers will dam most small streams, produce a series of ponds and wetlands that change the habitat dramatically.  When the food is gone within a convenient waddle the Beavers will move on to fresher ground and do the same thing again.  Away from people, this poses no great threat, but around housing, Beaver producing new ponds, road flooding and eating the landscape (they have to eat a lot, the food they eat is fairly low in nutrients), they become unpopular.

Trapping Beavers for their pelts, most of which went to produce felt for hats, was an important step in the opening of the American west.  The fur trappers mapped the land, learned the routes that pioneers later took, probably helped introduce the diseases that largely killed off the native Americans.  It also all but eliminated the Beavers, as the Europeans had almost done with their sister species, the Eurasian Beaver.

According to Charlie, a Beaver or two have moved into the small stream that runs into the Harbor. And the saga of the beavers continues at work, as well.  After a "Beaver Summit" a decision was reached to install a device to lower the height of their pond, to encourage them to move elsewhere.  If that fails, they'll probably be trapped and moved elsewhere by force.  Although, I hear they're tasty if cooked correctly...
Posted by Fritz at 8:37 AM