Rare Sea Turtles to be Released into Chesapeake Bay 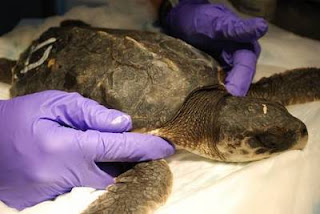 
Five endangered Kemp's ridley sea turtles nursed back to health by the National Aquarium are being returned to the wild on Sunday.

The rarest and smallest of all sea turtles, the five were found stranded last winter along Cape Cod suffering from cold stunning, not unlike hypothermia. They were shipped to Baltimore by the New England Aquarium, where they've spent the past six months rehabilitating in the local aquarium's marine animal rescue program.

At 11 a.m. on Sunday, the aquarium staff plan to release the turtles at Point Lookout State Park in southern Maryland, where the Potomac River meets the Chesapeake Bay. Kemp's ridley sea turtles are known to feed on jellyfish and other aquatic life in the bay during the summer. The public is invited to be on hand to observe the release. Directions are here.

If you can't make it, some of the turtles will be fitted with small satellite transmitters so their movements can be tracked. The aquarium plans to plot the animals' locations on a map on its website, which you can see here.

This is neat, but I wonder why they are releasing them into the Bay instead of driving them all the way down to the ocean, which is a far more common habitat for sea turtles?  Maybe it gives them a better chance to track them.  I guess we'll have lots of jellyfish for them to eat.

I've seen a few sea turtles out in the Bay; it's pretty eerie when a big loggerhead sticks his head out of the murk a few few feet from your boat.