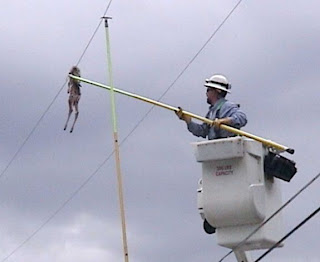 No, it wasn't delirium tremens.  An eagle dropped the fawn on the power line and shorted it out.


Lee Bridges says she was outside with her dogs around the time the power went out when a NorthWestern Energy truck pulled up, giving her a chance to ask the driver what caused the problem.

She says he pointed up and said, "Apparently, we've got deer with wings."

Bridges looked up and saw a dead fawn on a power line.

It's unlikely the animal had an accident while trying to make like distant-cousin Rudolph. Bridges suspects that an eagle dropped its prey and couldn't retrieve it.

The lineman who removed the carcass from the power line said he'd never seen anything like it.

Given long enough and plenty of places where it might occur, almost any highly improbable accident is nearly inevitable.