I took off solo this afternoon to try a little fishing. Fishing was slow, so I tried something a little different, taking some short video, which I uploaded to Youtube

One of the first thing I ran into out on the bay was schools of menhaden swimming near the surface, and acting for all the world like something was attacking them.  If there was, I couldn't figure out how to catch it... 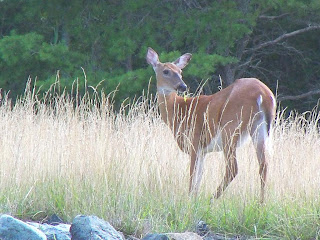 I tried all the usual places and didn't get too much. However, I did find a small school of deer grazing along the sea wall at the power plant.  There were three, but only one hung around for the photo shoot.

I did eventually locate a large school of small stripers.  I played around with three of them, and moved on. 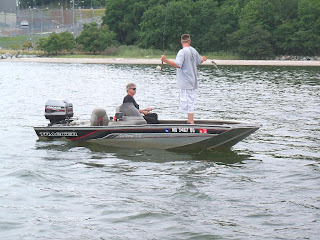 This guy was having fun catching 6 inch menhaden on a fly rod.


Just after I took this photo, I hooked a Cownose Ray on a light rod rigged for small stripers and had a heck of a fight for a few minutes.  I got him to the surface by the boat briefly, but that just pissed him off, and then he played freight train, and spooled off half my line before breaking free. 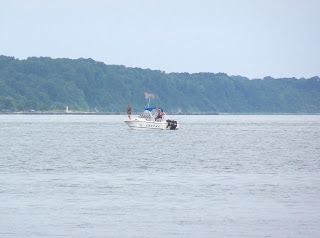 Another fishing buddy in his boat.  This is Elliott C.  I used to live next to him, and I learned to fish the Chesapeake Bay in his old 12 foot aluminum boat "Mayflower".  He's out with his son wade and some others.  Wonder how they did?

The birds were active tonight, working on having menhaden for dinner. Here an Osprey swoops down and grabs a menhaden. 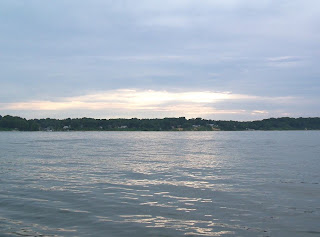 A view of the beach, with a glimpse of blue sky through a cloud layer.  Not really a proper sunset, but it all I've got.
Posted by Fritz at 9:23 PM