Research into the roots of our species suggests that stronger bonds between fathers and their children played a role in shaping society as we know it — which is a worthwhile subject for reflection on this Father's Day weekend. Some anthropologists even suggest that current social trends could bring us closer to the good old days of hunter-gatherer fathering. Although most moms wish the man in the house would take more of a role in childraising, things could be worse. Males take on the job of parental care in only 5 percent of mammalian species, according to research cited in "Fatherhood: Evolution and Parental Behavior." ...

Anthropologists say the rise of male-female pair bonding was a key factor. "We see that process getting under way around 2 million years ago but becoming more pronounced around a half a million years ago," Gray and Anderson write. With pair bonding, males had a bigger stake in defending their mates as well as their genetic progeny.

When fathers invested more time in nurturing the family group, the mothers didn't have to expend as much energy — and that opened the way to more frequent births and bigger families. At least that's the hypothesis advanced by Northwestern University's Lee T. Gettler in the journal American Anthropologist. That, in turn, led to a population explosion among the early members of the Homo genus.

So, from an evolutionary standpoint, the stay at home dad is a relatively recent phenomenon, which may explain why the behavior is not as well fixed a some others, and why bad decisions by society can weaken the behavior substantially (for example, subsidizing single motherhood). 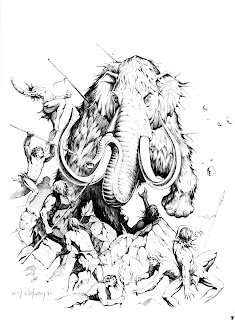 Last month, University of Colorado anthropologist Sandi Copeland and her colleagues published a paper in the journal Nature suggesting that hominid males tended to be stay-at-home types who stuck together as far back as 2 million years ago. The researchers' conclusions, based on an analysis of fossil teeth found in South African caves, lend weight to the idea that cooperative behavior among males was one of the hallmarks of hominid society.

The takeaway message is that fatherhood and male bonding took on a higher profile in the formation of hominid hunter-gatherer societies, even before the rise of Homo sapiens — and that those aspects contributed to the organization of early human society, on a scale that could be larger than that found among other primates to this day.

I'm inclined to suspect that the pattern first arose as hominids switched from scavenging to killing larger prey, which required a more co-operative life style than previously.
Posted by Fritz at 6:00 AM