A Different Kind of Mermaid 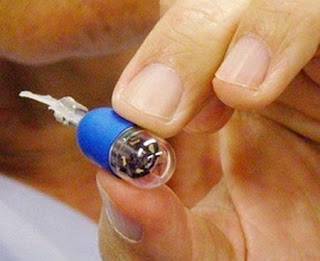 A couple days ago I posted about Mermaid Elle who frequents the Virginia Beaches.  Well, here is a very different kind of Mermaid:


Probing colons has never been this much fun. Japanese researchers have developed the world’s first self-propelled endoscopy device, a remote controlled tadpole-like camera that can “swim” through the digestive tack gathering imagery along the way.

This kind of endoscopy isn’t wholly new, of course, but previous iterations of ingestible cameras relied on natural muscle contractions to move them through the body. The “Mermaid,” as it is known, simplifies the process by moving quickly through the digestive tract to its destination, whatever that point may be. To speed the process, it can be inserted into the digestive system at either end, entering the body orally or--well, you know.

The device is just 0.4 inches in diameter and just shy of two inches long, and uses magnetic machinery to control its movement and location. Doctors pilot the endoscope with a joystick, watching its progress on a monitor. All said, it takes only a few hours to traverse the whole system from esophagus to colon. It could help ease the strain on patients and detect hard-to-see cancers earlier than was previously possible.

Colon cancer runs in my family.  Both Mom and Dad found they had colon cancer within a few months of each other a few years. back, and were operated on.  So far, both seem to have been spared a reoccurrance, and I'm on the "frequent flier" plan regarding colonoscopies.

I'd be willing to give this a try.  I wonder how bad the preparation is; and does it tickle?
Posted by Fritz at 8:18 PM

Email ThisBlogThis!Share to TwitterShare to FacebookShare to Pinterest
Labels: health