An interesting blog post at Overcoming Bias: Travel Made Humans


I hadn’t till now appreciated how central long distance travel was to early human evolution. A 2004 Nature article:


No primates other than humans are capable of endurance running. … Well-conditioned human runners … can occasionally outrun horses over the extremely long distances that constrain these animals to optimal galloping speeds, typically a canter. … Horses have … narrow ranges of preferred speeds for trotting and galloping and gait transitions that minimize cost. … Human runners differ from horses in employing a single gait. … Humans are thus able to adjust running speed continuously without change of gait or metabolic penalty over a wide range of speeds. …

Considering all the evidence together, it is reasonable to hypothesize that Homo evolved to travel long distances by both walking and running… Endurance running is not common among modern hunter-gatherers, who employ many technologies to hunt (for example, bows and arrows, nets and spearthrowers), thereby minimizing the need to run long distances. But Carrier has hypothesized that endurance running evolved in early hominids for predator pursuit before these inventions in the Upper Palaeolithic (about 40kya). Endurance running may have helped hunters get close enough to throw projectiles, or perhaps even to run some mammals to exhaustion in the heat. …

Another hypothesis to explore is … in the open, semi-arid environments … early Homo may … have needed to run long distances to compete with other scavengers, including other hominids. … Similar strategies of ‘pirating’ meat from carnivores are sometimes practised by the Hadza in East Africa. … It is known that major increases in encephalization occurred only after the appearance of early Homo. … Endurance running may have made possible a diet rich in fats and proteins thought to account for the unique human combination of large bodies, small guts, big brains and small teeth.

A 2009 Evolutionary Anthropology article on “The Emergence of Human Uniqueness”


Important preadaptations in the genus Homo … led to human uniqueness. First, hominins are bipedal and, as a result, cover geographical ranges far larger than other apes do. Even hunter-gatherers living in tropical forests have daily home ranges that are two to three times those of chimpanzees, and lifetime home ranges more than two orders of magnitude greater. Thus, individual hominins faced more environmental variability than do chimpanzees. … This would favor social learning capacity.

You know the "Runner's High?"

Well, I don't.  I did a little running back in graduate school.  It always felt shitty.  I eventually made it to about 8 minute miles, and finished a 7 km race somewhere behind a 80 year old woman.  I quit after I started getting shin splints.

But clearly the adaption to bipedalism and running is important to what it means to be human.  We are unique among apes in our ability to stand upright for long periods of time and to run for long periods of time.  That did not develop without a significant evolutionary driving force, and the ultimate evolutionary driving force is dying if you don't have it.  Humans developed the ability to stand upright and run because the ones who didn't died early.

Let's see what the Dinobabes have to say about it: 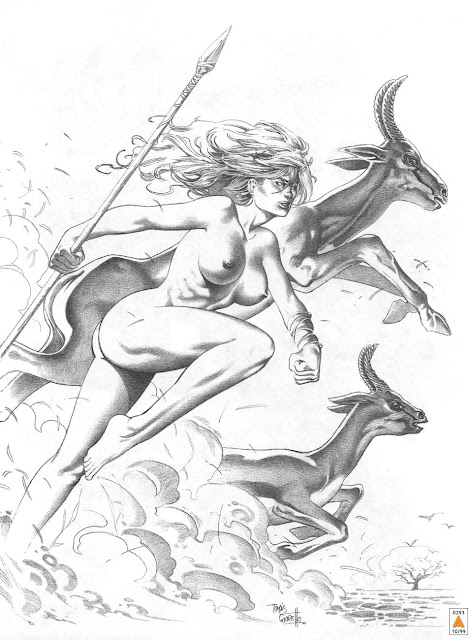 Email ThisBlogThis!Share to TwitterShare to FacebookShare to Pinterest
Labels: archeology, Cuties, Me, science