Charity Watchdog: “It seems like the Clinton Foundation operates as a slush fund for the Clintons”


When your “charity” rakes in $149 million in a year and spends nearly as much on fundraising as it gives to charity, it isn’t a charity. Calling it a slush fund is kind. Seems more like a criminal enterprise.


The Clinton Foundation’s finances are so messy that the nation’s most influential charity watchdog put it on its “watch list” of problematic nonprofits last month.
The Clinton family’s mega-charity took in more than $140 million in grants and pledges in 2013 but spent just $9 million on direct aid.
The group spent the bulk of its windfall on administration, travel, and salaries and bonuses, with the fattest payouts going to family friends.
On its 2013 tax forms, the most recent available, the foundation claimed it spent $30 million on payroll and employee benefits; $8.7 million in rent and office expenses; $9.2 million on “conferences, conventions and meetings”; $8 million on fund-raising; and nearly $8.5 million on travel. 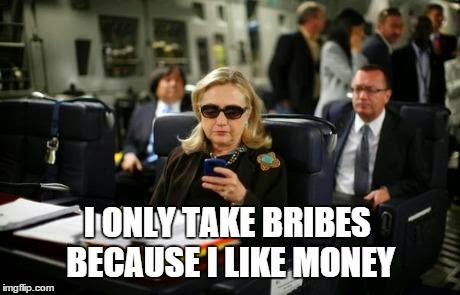 So when you donate to the Clinton's "charity" roughly 6.4% (9 out of 140) goes to charity, and 93.6 goes to feed the Clinton machine. And I'll bet if you look hard at the 9 million in aid alleged to be direct, you'll find some substantial fraction of that circles back around to their benefit somehow.

None of the Clintons are on the payroll, but they do enjoy first-class flights paid for by the Foundation.
In all, the group reported $84.6 million in “functional expenses” on its 2013 tax return and had more than $64 million left over — money the organization has said represents pledges rather than actual cash on hand.
Some of the tens of millions in administrative costs finance more than 2,000 employees, including aid workers and health professionals around the world.
But that’s still far below the 75 percent rate of spending that nonprofit experts say a good charity should spend on its mission.

The IRS has time to harass conservative groups, but makes no effort to investigate this fraud even though these con artists are now going back and refiling five years’ worth of taxes. Most anyone else would be in prison.


Charity Navigator, which rates nonprofits, recently refused to rate the Clinton Foundation because its “atypical business model . . . doesn’t meet our criteria.”
Charity Navigator put the foundation on its “watch list,” which warns potential donors about investing in problematic charities. The 23 charities on the list include the Rev. Al Sharpton’s troubled National Action Network, which is cited for failing to pay payroll taxes for several years.

It's not a charity; it's the family business. It pays for all the political operators that follow the Clintons around, and rush to the their defense at the first whiff of scandal (which means they're very busy indeed). The wealthy families of the Italian Renaissance would understand.

At this point, I would be willing, no ecstatic to undo the tax exemptions of NGOs in general, and get that money back into the real economy. And foundations should be required to spend 10% of their principal annually.

And more: Everything You Need To Know About The Latest Clinton Foundation Scandals, Explained

. . . What’s the news?
Where to start? Newsweek reported over the weekend that one of the Clinton Foundation’s largest donors—Ukrainian oligarch Victor Pinchuk—was doing business with Iran between 2009 and 2013, while Hillary Clinton was secretary of state.

Wow. Wouldn’t that violate U.S. sanctions?
Probably. Non-U.S. companies can face penalties under the law for trading with Iran, and have in the past.

Who was in charge of determining which non-U.S. companies get penalized?
Thanks for asking. The secretary of state oversees the list of foreign companies deemed in violation of U.S. sanctions against Iran.