The Army's Recruiting Problem - A View From the Cheap Seats

Ski, aka Col. Andrew Dziengeleski is slowly but surely working his way through the Army's (and by extension, the Marine's) recruitment  problems: The Recruiting Crisis Has Arrived, Part One

So the Army and Marines haven’t reached that stage of crisis yet, but it’s getting close. In response to the “really bad” recruiting crisis, the Army is losing force structure and what is known as endstrength as well. Think of it this way, force structure are the units, and endstrength is the personnel who form those units into cohesive organizations capable of performing their missions. How bad is this? Well, according to a July 19th, 2022 Military.com article, “Army officials on Tuesday said the service will fall about 10,000 soldiers short of its planned end strength for this fiscal year, and prospects for next year are grimmer. Army Gen. Joseph Martin, vice chief of staff for the Army, said it is projecting it will have a total force of 466,400 this year, down from the expected 476,000. And the service could end 2023 with between 445,000 and 452,000 soldiers, depending on how well recruiting and retention go.” For more depressing reading within that article, read here:https://www.military.com/daily-news/2022/07/19/army-cuts-force-size-amid-unprecedented-battle-recruits.html

The Personnel Crisis Has Arrived, Part Two: Putting It Into Perspective

The final number, as you may have guessed already, is the sum total of the prior four numbers, or 102,000 personnel from a 1.1 million person Total Army. This doesn’t include personnel who are unforeseen losses due to height and weight failures, failures of the new Army Combat Fitness Test, or other causes for removal from the rolls. Roughly ten percent of the entire Army will be lost by the end of Fiscal Year 2023, and the recruiting machine will almost certainly never be able to catch up to these losses, especially with the current recruiting environment. The best campaign from World War Two that compares with this number is the entire Italian Campaign, which left almost 110,000 Americans dead and wounded from 1943–1945 and was generally seen as a bloodbath due to questionable leadership from General Mark Clark. In fact, Clark was forced to testify to Congress after the War had ended to explain his actions and decision-making on the Italian Peninsula.

I suspect that if the Army does in fact lose 102,000 personnel over the next 14 months, other General Officers from the Army will be called to testify in front of Congress, but by then, the damage will be done, and who exactly will be held responsible?

The Personnel Crisis Has Arrived, Part 2.5

And this brings me to the topic of Army Civilians, and their roles within the Army. Many Army Civilians, especially those in the “GS 13–15” ranks (these are senior civilians, equivalent in rank to field grade officers in uniform), are prior service or retired Army officers. As described in this piece by GovernmentExecutive.Com in 2018, “Nearly 1.5 in ten federal employees are eligible to retire today, according to data maintained by the government’s human resources office, though in five years that number will spike to three in 10.” These are pre-pandemic numbers, mainly driven by the Baby Boomer demographic retiring out of the workforce. In addition, the article states, “All told, about 14 percent of federal employees are currently eligible to retire, according to data provided to Government Executive by the Office of Personnel Management. In five years, that is expected to jump to 30 percent.” There was already a brain drain and experience drain occurring prior to the pandemic, and the pandemic accelerated retirements to an even higher level. You can see the actual statistics for DoD in that article as well.

In a recent Government Executive article, the authors looked into the newest attrition rates within the Federal agencies, and it’s not great news for the Army. As written, “The Veterans Affairs Department had the highest attrition rate in government, at 7.1%, followed by the Army, Air Force and Treasury Department.” The Army is now dealing with a higher than average loss in personnel within their civilian ranks as well. It is not known how many civilian personnel are leaving, either voluntarily or involuntarily, due to COVID-19 vaccine refusals. In any case, the Army’s civilian corps is now facing an aging out of its most experienced personnel, and it’s close to the top in the lack of job satisfaction as seen in the Government Executive article linked in this paragraph.

But some good news for military recruitment, US Army is developing a tactical bra for its female soldiers 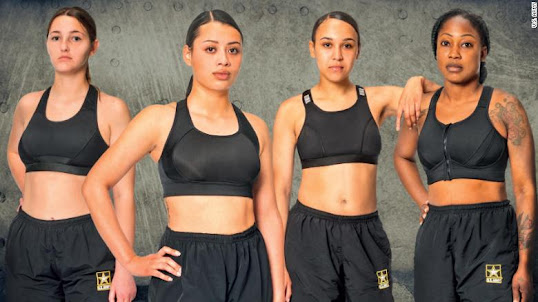