Trump to get 'Special Master?'

Yep, we're still talking about the affidavit. Or as Stacy McCain puts it Affidavit, Laugh-idavit

Trump’s lawyers have pointed out that the affidavit raises more questions than it answers. Everything about this raid stinks of political motivation, and Margot Cleveland is probably pretty close to the target in saying that this was just a “get Trump” fishing expedition.

Teach at Pirate's Cove says DOJ Releases Some With Black Marks Giving Unknown Rational For Mar-O-Lago Raid. Ryan King at WaEx catalogs Six things we still don't know about the Trump raid after redacted FBI affidavit released "What was in those documents? Full context of why the documents were stashed at Mar-a-Lago. Why weren't the classified documents given to the DOJ earlier? Will Trump get charged? Who was the inside source? Did any of the documents relate to nuclear weapons?" Breitbart notes Affidavit: ‘National Security’ NOT Cited by DOJ Among Reasons for Redactions, but then again, 'covering our asses' wasn't listed either, but it was clearly a reason.

It appears that at least one judge is buying Trumps argument that a neutral "Special Master" is needed to sort through the documents, and at least decide which items are really personal, and which should be returned to the government. Fox, Judge announces 'preliminary intent to appoint a special master' to review Trump records seized by FBI. Sundance at CTH, Florida Judge Indicates Intent to Appoint Special Master to Review Material Seized by DOJ in Trump Raid

U.S. District Court Judge Aileen Cannon has issued a two-page order [SEE HERE] indicating her willingness to appoint a special master to review the documents seized by the DOJ in the Mar-a-Lago raid.

Judge Cannon has asked the Justice Department to produce by Tuesday “a more detailed” list of items seized from Trump’s residence on Aug. 8 as well as the status of the government’s ongoing review of those materials, which includes the use of a “filter team” to screen for attorney-client privileged records.

Politico whines Judge signals she's likely to back Trump request for Mar-a-Lago special master. I would hope a truly neutral "Special Master" might quickly see that most of the documents in question were declassified documents relating to the Russiagate, and reflected badly on the DOJ and FBI that Trump was holding for a good reason. PM,  Devin Nunes says FBI was after Russiagate hoax documents. But upon Da Hill, Biden scoffs at Trump claim he declassified Mar-a-Lago documents: ‘Come on’. At HuffPoo, William Barr Rips Trump For 'Pandering To Outrage' Over Mar-A-Lago Search, "It's premature to reach a conclusion about the ex-president's trove of government documents stashed at Mar-a-Lago, his former U.S. attorney general said." Sundance, President Trump Tried to Work Within the System, and goes into painful detail about why it didn't (and can't) work. "The DOJ and FBI will do everything they can to stop the release of documents outlining how the system worked to target candidate and President Trump." Vicky Taft at PJ Media, That Mushroom Cloud You See Is Another Trump Media Narrative Exploding Before Your Eyes. Nuclear secrets.

At WaPoo, U.S. intel agency to assess security risk of documents found at Mar-a-Lago. Not good on several levels. The intel agencies are packed with Trump haters, and even setting that aside, they are jealous of their "right" to hide their mistakes and corruption behind classification.

Predictably, liberals are pissed, 'Bonchie' at Red State, Judge Hands Trump a Win in Fight Against FBI, Wailing and Gnashing of Teeth Follows

You know you are over the target when the left-wing legal “experts” on the bird site start frothing at the mouth. Someone should ask them what they are so afraid of. How is transparency and accountability in this process a bad thing? Given the disputes over the records, it only makes sense that a hopefully neutral third party would be allowed to arbitrate between the two sides. The NARA is not all-powerful. It does not lord over the executive branch, and just because they say something doesn’t make it true or the law.

Matt Taibbi wonders what happened in The Great Disappearing Raid Story "Excuse me for giving a damn, but what happened to the Trump raid story?"

Nick Grossman at YaHoo! contends If Prosecuting Trump Sets a ‘Dangerous’ Precedent—So Does Letting His Crimes Slide, but of course, the precedent was already set by the FBI/DOJ handling of Hillary. At Da Mail, Trump's ex-lawyer Alan Dershowitz says the DOJ has 'enough evidence to indict' former president, but wont because Hillary Clinton's handling of State Department emails was worse. AllahPundit creamed his jeans, Dershowitz: There's enough evidence in the Mar-a-Lago case to indict Trump "Certainly, Trump should be held to the same standard that Hillary Clinton was when the feds declined to prosecute her in 2016. Which, I suspect, is the reasoning Merrick Garland will use when he ultimately decides not to bring charges here." Dan Chaitin at WaEx cites Andy Weissman, Mueller's 'pit bull': Trump is going to be prosecuted. Isn't that what he said last time. At Da Beast, Brad Mossman, It’s Over: Trump Will Be Indicted. Even Sundance reports Newt Gingrich Predicts DOJ Will Attempt to Indict President Trump Using a DC Grand Jury, “They are Playing for Keeps”

From the perspective of Mr. Gingrich the institutional system within Washington DC is “playing for keeps” with “no interest in the law,” in their effort to keep Donald Trump from challenging the corrupt system now controlling the U.S. government. Unfortunately, I agree with the prediction. 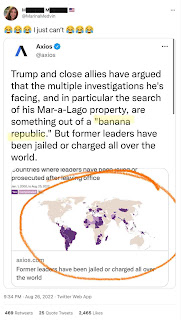 
At PM, Meta lashes back against Zuckerberg over Hunter Biden story suppression "None of this is new," Meta Newsroom wrote in response. "Mark testified before the Senate nearly two years ago that in the lead up to the 2020 election, the FBI warned about the threat of foreign hack and leak operations." 'Bonchie' at Red State, claims the FBI Responds to Its Facebook Scandal by Treating Americans Like They Are Idiots

There was no question at that point that the laptop was not Russian disinformation. Yet, the FBI played it up as that anyway, knowing full well that Facebook and others would run to censor the story. Why? Because those same companies had been under heavy congressional pressure to stop disinformation and misinformation. In other words, whether the FBI actually “directed” Facebook to do anything is irrelevant. What’s relevant is that they set the stage for what happened, knowing that they were misleading the social media companies in doing so. In the ironies of all ironies, the FBI used disinformation to frame something as disinformation in order to harm a political opponent.

Ben Whedon at JTN reports Trump campaign turned down Ashley Biden diary, urged suspects to give it to FBI

At Althouse, "Alex Berenson Sued Twitter Over Being Banned and Was Reinstated."

It's a long segment so don't miss the key material near the end, explaining why he settled with Twitter and how he's moved on to publishing documents showing that the federal government pressured Twitter to ban him. Twitter had accepted him, he says, and White House people said they wanted him banned, and, within 6 weeks, he was banned.

That clip should be put alongside this other Joe Rogan clip, from one day earlier. Here's Mark Zuckerberg talking about the FBI's pressuring Facebook to moderate content:

Sundance cryptically comments Lots of FBI Officials Work at Jack’s Magic Coffee Shop "In the latest datapoint assembly, a solid dive by MintPressNews into the number of former FBI officials working at Twitter, shows just how enmeshed the federal police are with the social media platform. The scale is really quite remarkable. [SEE HERE]"

KT at Haut Hair, Nikki Haley after tax forms leak: 'Republicans have been too nice for too long'. But they're hiring 80,000 potential new leakers. But, Ski confidently predicts they'll never be able to hire that many given the current job situation. Sundance, no fan of Haley says Nikki Haley Charter Club Donors Leaked, Wall Street Hedge Funds, Multinationals and Affluent Democrats are Top Donors. So I wonder if the Biden/Garland DOJ will look into the leak?

At JTN, Congress spends nearly $100,000 on meditation app for staffers distressed by Jan. 6 "The normal charge for the app that House staffers are offered for free is $14.99 a month or an annual fee of $69.99." Graft for somebody, I'm sure.

Matt Vespa at Town Hall, What the Hell Did Joe Biden Just Say? "BIDEN: "If we elect two more senators, we keep the House in Democrats, we're gonna un, get a lot of unfinished business we gonna get done." WaPoo approved, ‘Semi-fascism’: Rhetoric reflects newly aggressive Biden strategy, "With sharp attacks on the GOP and individual Republicans, Biden and the White House signal they will not rely solely on touting the president’s accomplishments during the midterm campaign" KT at Haut Hair, Yikes! Yellen and Jill Biden advised him not to cancel student loan debt, but Joe listened to someone else. "Instead of listening to a couple of people who might actually know a little something about the subject, Joe Biden decided to listen to Kamala Harris. That’s right. Biden acted on Kamala’s advice." From Athena Thorne at PJ Media, WATCH: Sarcastic New Ad Rips Biden's Student Loan Debt 'Bailout for Rich Kids'

At Wa Free Bee, New Modeling Shows Democrats Have 65% Chance To Retain Or Grow Senate Control, according to 538. At WaPoo, Once unthinkable, Democrats now see narrow path to keeping the House but Has the political environment shifted? Alums of 2010, 2018 wave midterms urge caution.
"Midterms rarely deliver big political surprises, but recent elections have made Democrats more confident. Still, alumni of huge wave elections in 2010 and 2018 know it isn’t that simple," and Trump ,is turning the midterms from a referendum into a choice  At Spectator World, Pennsylvania’s Senate race to the bottom, "These two are not the prize hogs at the Bloomsburg Fair." Breitbart, Jailbreak John Fetterman: My Top Priority is Ending Life in Prison Without Parole for Convicted Criminals. Newsweek, Doug Mastriano Deemed a 'Traitor' After He's Shown in a Confederate Uniform "Media MELT DOWN that Mastriano apparently once posed as a civil war historical figure for a photo," Jenna Ellis, a lawyer who represented Trump, said in a tweet. "And? He has a Ph.D in HISTORY. The left wants to erase history. @dougmastriano wants us to learn from it."
Stacy McCain wants to know Why Do Democrats Hate Women? "Florida Democrats had a chance to nominate a “progressive” woman for governor, but instead of Nikki Fried, they chose Charlie Crist — and it wasn’t even close. Crist won by almost a 25-point margin, 59.7% to 35.3% for Fried. . . . Meanwhile, in New York . . . Democratic primary voters had a chance to send Carolyn Maloney back to Congress in the 12th District, but instead they chose Jerry Nadler and, again, it wasn’t even close. . . Why? Because Democrats hate women! It’s battered women’s syndrome — they keep going back to the abuser, thinking he’ll change his ways if they just love him enough. "
'Beca Downs at Town Hall thinks Charlie Crist’s Choice of Running Mate Makes It Seem Even More Likely He’s Trying to Lose.  Capt. Ed at Haut Hair, Wait ... Charlie Crist picked who as a running mate? Karla Hernández-Mats the president of United Teachers of Dade.
Jazz Shaw at Haut Hair notes NY Governor tells 5.4 million Republicans to leave the state. Fine, but who will bring the food, power and water?
Wa Ex, Alaska will be counting for weeks thanks to idiotic ranked choice voting. At JTN, Dominion Voting Systems deposes Carlson, Hannity in suit against Fox News, "Dominion brought the $1.6 billion defamation suit after the outlet covered its role in the 2020 presidential election"
Posted by Fritz at 10:47 AM