Ace, DOJ Argues That Its Warrant Cannot Be Unsealed Because Its Contents Are Too Sensitive While It Continues Leaking the Supposed Contents of This Warrant to All of Its Media Pals

Note: The magistrate (not a judge) has ordered that the affidavit must be partially made public. I'm sure the parts that will be made public will be the parts the DOJ and FBI want made public, the parts they've already leaked. Nothing supporting the claims they've made in their leaks.

I guess I'll cover the affidavit later when it's revealed.

Update: Judge Reinhart says "I am not prepared to find that the affidavit should be fully sealed" and asks the government for proposed redactions to the Mar-a-Lago affidavit by next week, adding this will be a careful process.

So the government gets to pick-and-choose what is redacted and what isn't, which is the worst of all possible worlds.

Based on previous "redacting" experience, I expect the DOJ to take more time than the allotted week to return to the judge magistrate with an affidavit that's almost fully blacked out. The judge magistrate will then take a few weeks to get back to the DOJ with a thumbs up or thumbs down (likely a thumbs down) and orders to reduce the amount of redaction, but no specific instructions, resulting in an iterative process that takes place all the way to the midterms. Result? No information except what DOJ chooses to leak. Another interesting point:

Apparently the affidavit is only a top national security secret when people want to view it with a critical eye. When his leftwing media allies agree to transmit his claims without any skepticism, his leaks do not endanger national security. Sean Davis @seanmdav

Apparently, the FBI and DOJ are citing their own leaks to the press in their motion to deny making the affidavit supporting the warrant public. This affidavit is too sensitive to be released. Just look at what we've leaked to the press so far, and that's just a taste, your honor!

Matt Vespa at Town Hall,  Here’s the Alarming Phrase in the Order About the Trump Raid Affidavit, "Judge Reinhart said he would afford the government “a full and fair opportunity” to make redactions. We all know where this is going, and Mike Davis, a former law clerk to Justice Neil Gorsuch, did not hold back with how the redaction process will be handled. . ."  AllahPundit at Haut Hair grins malevolently, Trump search warrant judge: I'll release the FBI affidavit -- once it's redacted. "This is a nice gesture towards transparency but it’s destined to please no one." Vicky Taft at PJ Media, Judge Rules That SOME Documents Supporting Trump Mar-a-Lago FBI Raid Will Be Released. What an optimist. Da Caller, FBI Was After Documents Trump Believed Would ‘Exonerate’ Him From Russia Conspiracy

The FBI collected all of the documents that were government property and used concerns about classified documents to justify the raid, but agents were looking for Trump’s personal stash containing documents related to Russian collusion accusations against him, fearing that he would “weaponize” them, Newsweek reported. One former Trump official said he may have planned to use the documents to help in a presidential run in the coming term.

“Trump was particularly interested in matters related to the Russia hoax and the wrong-doings of the deep state,” the official told the outlet, adding that he may have intended to use the documents in a 2024 presidential campaign. “I think he felt, and I agree, that these are facts that the American people need to know.”

This is why it appears this was a raid in search of a crime. As I wrote at PJ Media shortly after the raid:

The warrant covers any documents that Trump touched between his first day and last day in office. This included, “information, including communications in any form, regarding the retrieval, storage, or transmission of national defense information or classified material, any government and/or Presidential Records created between January 20, 2017, and January 20, 2021.”

Later, anti-Trump prosecutors showed atypical humility and admitted that, yes, they’d “over collected” documents such as Trump’s passports and privileged documents between Trump and his attorneys. This is no small thing. This is enough to get evidence and possibly the whole case thrown out by a judge. Fruits of the poisonous tree and all that. If agents had an appropriately tailored search warrant and had the judge bothered to look at the underlying documents, then privileged documents that were clearly out of the scope of the warrant wouldn’t have been confiscated. That is unless Trump and his attorneys were scoring crack, smoking meth, doing deals to get raw materials to make lithium batteries for the Chi-coms, and getting payoffs from the Ukrainians and Russkies. Wait, sorry, that’s Hunter Biden and The Big Guy.

I don't see the warrant getting thrown out, at least until it makes it to the Supreme Court. Ace, In 2012, Hyperpartisan Liberal Judge Amy Jackson Brennan Ruled That President Clinton Had Far-Reaching Discretion to Decide Which of His Documents Were Personal Records, and Which Were Official Records "If this sounds as if it is potent precedent which will avail Trump greatly, stop dreaming; this is a Democrat-Only Rule. Judge Brennan will have no problem at all deciding that this doesn't apply to Trump, citing the case of BecuzISedSo vs. Nunya Business." Althouse "Donald Trump and his allies are reportedly talking about releasing Mar-a-Lago surveillance footage showing FBI agents searching the Florida resort."

"This will supposedly show jackbooted FBI thugs swarming over the former president’s home, graphically illustrating his long-running complaint of political persecution. Trump absolutely should release that footage. It would totally Own the Libs...."

I see it as two sides of a battle over optics. DOJ/FBI is clearly leaking selective information designed to paint Trump in a bad light? Fine, he'll release his own selectively edited footage designed to show the FBI guy acting like jackbooted thugs. At Da Fed, Margot Cleveland outlines 10 Similarities Between The FBI’s Mar-A-Lago Raid And Spygate "1. A Shocking Storyline of Trump Putting America at Risk." 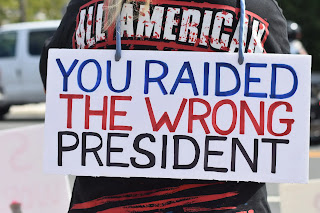 From the Wombat's In The Mailbox: 08.18.22, Da Tech Guy: The Biden Regime is once again attempting to criminalize America’s Founding Principles, and Am Think, Bill Barr Had His Chance — and Blew It Dan Flynn at Am Spec, The FBI Who Cried Wolf, "The bureau’s Mar-a-Lago raid reeks of secret-police tactics as it attempts to destroy Trump." Mary Chastain at LI, Grassley to FBI Director Wray: Whistleblower Info Shows ‘Deeply Rooted Political Infection’ in FBI, "Grassley wants to know why the FBI constantly investigates Trump and ignores verified and legit information about Hunter Biden." Lloyd Billingsley remembers other cases of FBI overreach, Live Freeh or Die, "Skeletons in the FBI’s closet—and warnings of more violence to come." Miranda Devine at NYPo thinks Liberals’ FBI trust is a real gut buster. "Liberals are happy because a politicized agency is coming after their ideological enemies, particularly their bête noire, Trump." At Am Great, VDH warns of ‘Civil War’ Porn, "Those who warn most of some mythical civil war are those most likely to incite one . . .The FBI raid on Donald Trump’s Florida home, the dubious rationale for such a historic swoop, and the popular pushback at the FBI and Department of Justice from roughly half the country have further fueled these giddy “civil war” conjectures. "

At Breitbart, Donald Trump Calls to Dissolve January 6 Committee in Wake of Liz Cheney’s Loss: ‘The People Have Spoken!’ A nice thought, but that's not how these things work.

By way of the Wombat's In The Mailbox: 08.18.22, the Victory Girls hear Michael Hayden: Republicans Are Dangerous. Ace, Former CIA Director, Russiagate Hoaxer, Hunter Biden Laptop Suppresser, and Mentally-Ill Psychopath Michael Haden Declares War on Half the Country, Declaring Republicans To Be More Dangerous and Contemptible Than Any Enemy America Has Fought.
Liz Cheney's long goodbye. The Babylon Bee on Liz Cheney's Wyoming loss, Producers Confirm Liz Cheney Will Not Be Back For Season 2 Of January 6 Hearings. Scott McKay at Am Spec, See Ya ’Round, Liz, "Cheney’s trouncing Tuesday shows just how fed up the Right is with Never Trumpers." At Town Hall Kurt Schlichter opines Cheney’s Humiliating Defeat Is Another Sign That We Are Winning. Insty notes SNL, “WE WILL SEE YOU ON MSNBC IN ABOUT A WEEK.”
'Bonchie' at Red State tells of how Harriet Hageman was Accused of Lying About Liz Cheney Concession, Then She Released the Voicemail. Graceless.
WaPoo pushing a Cheney run for President, Liz Cheney for president? Why it could actually matter. Jim Geraghty at NR (cited by Haut Hair), The folly of a Liz Cheney independent presidential bid. Bulwark Girlz Amanda Carpenter (cited at Haut Hair too) says Shut down the Cheney 2024 chatter. AllahPundit at Haut Hair VIP whines The RNC will never let Liz Cheney on a debate stage with Trump. Nor should they. Matt Margolis at PJ Media notes The Purge of Impeachment Republicans Is Nearly Complete.
Ace, David French: I Cannot Support Such a Thuggish Cad as Ron DeSantis. I'm a Mike Pence Man, Through and Through! "Ron DeSantis is MAGA-Adjacent. Remember, these are the people who accuse others of being in a cult." At Am Think David Zucker wonders Does Trump have the political savvy to succeed in a second term? It's a valid question.
HE wonders Is the Red Wave Crashing? Stephen Kruiser at PJ Media, Should the GOP Hit the Panic Button About November? No, but it's time to get back to work. Breitbart, Mark Kelly Conspicuously Avoids Topic of Gun Control on Campaign Trail. Confront him about it. Via  the Wombat's In The Mailbox: 08.18.22,Weasel Zippers  Pennsylvania Dem Senate Candidate Wants To “Legalize Heroin” And Allow Taxpayer-Funded Drug Dens. Again, confront him with crying mothers. But to be fair, he does have brain damage. Deroy Murdock at Am Spec details Never Trumpers’ Despicable Attack on Herschel Walker, "They’re backing far-left Sen. Raphael Warnock instead." Breitbart has a good sign, Ohio Flips: 1st Poll Post Mar-a-Lago Raid Shows J.D. Vance, Republicans Have Overtaken Democrats
From the New Neo, “Debunked” this and “false” that – and “deniers” "No doubt all you news junkies have noticed that the MSM has taken to putting modifiers such as “debunked” and “false” in front of any statement they don’t like. It’s so commonplace it’s become a sort of bitter joke on the right, like “Republicans pounce!” when the Democrats mess up and the right criticizes them." Shawn Fleetwood at the reports Montana Election Officials Conspired To Kill Legislation Banning Zuckbucks, New Report Shows. "Free" money ain't free of strings. Take their money and use it to support Republicans and it will stop.
Posted by Fritz at 11:10 AM