But out how and to where is the question.  NYPo reports Top FBI agent resigns amid claims he shielded Hunter Biden from probe: report.

A top FBI agent at the Washington field office reportedly resigned from his post last week after facing intense scrutiny over allegations he helped shield Hunter Biden from criminal investigations into his laptop and business dealings. Timothy Thibault, an FBI assistant special agent in charge, was allegedly forced out after he was accused of political bias in his handling of probes involving President Biden’s son, sources told the Washington Times on Monday. The agent was escorted out of the field office by at least two “headquarters-looking types” last Friday, the sources said. 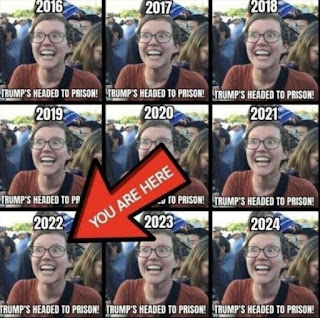 At LI, Mary Chastain, Top FBI Agent Forced Out After Accusations of Political Bias Concerning Hunter Biden, "Timothy Thibault, who supposedly has left the agency, has been mentioned quite a bit in letters from Sen. Grassley to FBI Director Wray." Ben Whedon at JTN, FBI special agent who opened Trump investigation reportedly escorted out of Bureau. "Grassley confirmed to Just the News prior to the raid that Thibault had been removed from his post and reassigned to an unspecified position." OK, that's weird. He was moved to a different position prior to the raid, but was escorted out of the building on Friday. Ace, Hmmm: Partisan FBI Agent Who Opened Trump Investigation Seen Being Escorted Out of FBI Building By "Headquarters-Looking" Types, Trump Demands a New Election, "Did the highly partisan Democrat operator Thibault just get fired?" Sundance at CTH, Reports, Lead FBI Agent on Hunter Biden Laptop and FBI Trump Targeting Operations, Removed from DC Field Office. Sarah Lee (she makes fine pastries) at Red State, Who is FBI Agent Timothy Thibault?, and 'Bonchie' at Red State rhetorically asks What Does the FBI Removal of Timothy Thibault Say About the Hunter Biden Investigation? That it's been a sham.  "Lastly, given Thibault’s involvement with the Mar-a-Lago raid, there’s also a possibility that the FBI realized it crossed a line it shouldn’t have crossed. This could be a course correction, albeit, it’s not one that should satisfy anyone. There’s more work to be done here, but in an environment that has offered little good news lately, this may be a small, yet welcome glimmer of hope."

From PM, Trump calls suppression of Hunter Biden laptop story 'election interference' and Trump calls on FBI whistleblowers to step forward. "When are the great Agents, and others, in the FBI going to say 'we aren’t going to take it anymore'" Dave Drucker at WaEx reports Grassley vows to pursue Hunter Biden and root out FBI 'political bias'. Ace, American Stasi: The FBI Is Now Lying About What They Told FaceBook About the Laptop. Dan Chaitin at WaEx, Trump spy chief 'surprised' by Zuckerberg's FBI story ""I was actually surprised to hear Mark Zuckerberg say that, because what he related the FBI told him was exactly the opposite of what my conversations with the FBI director himself at the time were about," Ratcliffe said."

Mike Miller at Red State hears it's Confirmed: DOJ Admits FBI Seized ‘Attorney-Client Privileged Information’ in Mar-a-Lago Raid. The so-called 'taint team' found documents that the FBI were not entitled to. Herr Professor Jacobsen at LI, Mar-a-Lago Raid: Feds Seized Privileged Trump Documents, New Court Filing Confirms "Feds: “identified a limited set of materials that potentially contain attorney-client privileged information, completed its review of those materials, and is in the process of following the procedures set forth in paragraph 84 of the search warrant affidavit to address potential privilege disputes.”" Fox, Justice Department tells judge it already reviewed Trump documents, "The DOJ said their team went through the materials before the court called for an independent special master." WaPoo whines Naming of special master could complicate Mar-a-Lago documents case, "Judge Aileen Cannon signaled intent to appoint an outside analyst to review materials" The FBI (and WaPoo et al)  wants us to think it's all OK, their specially selected (but unknown) "taint team" has examined the documents and fairly decided what was fairly seized and what was not. Yah. But I don't trust them, either to select a fair "taint team" or given the FBI's previous gross corruption in matters pertaining to Trump, to make fair judgements. Let the judge order a "special master", preferably one sensitive to the rights of the President, look through all the document again and make an independent judgement, and take it to the judge. Then the judge can decide what to do about any conflicts between the "taint team" and the "special master" including excluding evidence if needed, or declaring the whole panty raid illegal and all evidence seized fruit of the poisonous tree.

Matt Vespa at Town Hall hears Biden Press Secretary Makes a Stunning Admission About the FBI Trump Raid "Jean-Pierre admitted that no one in the Biden White House, including the president, had been briefed on the FBI’s raid on Mar-a-Lago. . . . I find that hard to believe." At WaEx, White House says Biden 'not involved' in DNI Trump Mar-a-Lago damage assessment. I believe that, because Biden isn't really involved in anything except ice cream. Matt Vespa again, The One Letter That Exposes the FBI's Trump Raid Was Not About Missing Documents. FISA. Breitbart has an Exclusive with Lee Smith: People I Trust Say FBI Raid Was Search for Russiagate Documents at Mar-a-Lago. Yep. Now connect that with the fact that Thibault was also involved in Russiagate.

From the Wombats In The Mailbox: 08.29.22,  Am Power asks The Mar-a-Lago Affidavit: Is That All There Is?. Margot Cleveland at Da Fed details the case that the Redacted Mar-A-Lago Affidavit Confirms Biden’s DOJ Fished For A Crime To Pin On Trump. It seems to have impressed Althouse, "The public (understandably) may wish to sidestep the minutia of the mandates of the Presidential Records Act, but..."

"... three top-line takeaways prove imperative to understanding the scandal of the Mar-a-Lago search. First, the Presidential Records Act is not a criminal statute, and violations of that federal law do not constitute a crime. Second, the Presidential Records Act does not reach broad swathes of documents retained by a former president, including 'official records of an agency,' 'personal records,”' and convenience copies of presidential records. And third, the courts have refused to question a former president’s conclusion that a record constitutes a 'personal record' and not a 'presidential record.'"

'Adam Mill' at Am Great, One Giant Problem with the FBI’s Mar-a-Lago Raid "The FBI would do well to remember it has no constitutional authority except what it borrows from the elected president." JTN, Former Trump adviser Patel: Trump had been working on declassifying docs while in White House. HE, Donald Trump Jr. SHREDS Biden's DOJ over heavily redacted Mar-a-Lago raid affidavit. At NR, Rich Lowery thinks that All Things Considered, It’s Better Not to Be under FBI Investigation. Yes, but Trump never had the choice, having been framed by Hillary's mob even before he was elected, and the FBI has maintained the pressure with different charges ever since. We can't let the FBI behave that way. Chris Bedford at Da Fed marvels over The Short Life (And Amazingly Fast Death) Of The FBI’s Mar-A-Lago Play. Despite Resurrecting the Rosenbergs (Lloyd Billingsley at Front Page), Anxious is anxious a Poll that shows Republican voters rally behind Trump despite Mar-a-Lago search. Twitchy, Peter Strzok’s terrible, horrible, no-good, very BAD existence continues as he’s triggered by both Maggie Haberman AND Cernovich over Trump.

Jerry Dunleavy at WaEx reports Joe Biden picks Hunter laptop denier for presidential intelligence board, for political services rendered. "Jeremy Bash, a former chief of staff at the CIA and Pentagon, was picked by Biden to be part of the President’s Intelligence Advisory Board on Friday. Bash, along with roughly 50 other ex-intelligence officials, signed a letter in October 2020 claiming the Hunter Biden laptop saga had “all the classic earmarks of a Russian information operation,” while Bash himself suggested on TV that the laptop story was “Russian disinformation."

At Breitbart, Director Robert Davi: ‘My Son Hunter’ Told Through the Eyes of a Left-Wing Activist’

My Son Hunter director Robert Davi (Licensed to Kill, Die Hard, The Goonies) appeared on Rudy Giuliani’s podcast “Common Sense” this week to highlight behind the scenes details about the feature length film about the Biden family’s international web of corruption, saying the movie “is told through the eyes of a 25-year-old left-wing activist, who is working as a stripper to pay for her college loan.”

Military.com,  Prosecutors Ask for 17-Year Jail Sentence for Vet Who Assaulted a Cop with Marine Corps Flag on Jan. 6. Jazz Shaw at Haut Hair, Latest J6 rioter gets nearly five years for "encountering" Actually caught a glimpse of Chuckie Schumer "Pruitt received very special attention from both the Department of Justice and the press because of his alleged “affiliation” with the Proud Boys. He also holds the distinction of being the only rioter to come within visual distance of a Senator, specifically Chuck Schumer. "