From John Solomon at JTN, New twist in FBI raid: Trump had 'standing order' to declassify documents taken to residence, "Former president's office describe previously undeclared process that led to sensitive documents landing in Mar-O-Lago." AllahPundit at Haut Hair, is, of course, skeptical, Trump: There was a standing order that any documents I removed were declassified "Oh yeah? Where is that order? Surely it must have been written down at some point. Let’s see it." At WaEx, Ryan King cites Trump spy chief on classified documents: 'Virtually impossible to prosecute'.  Matt Vespa at Town Hall wonders Did the Justice Department Already Know That No Classified Docs Were at Mar-a-Lago?, or at least that the classifications were disputable:

It’s also clear that no one read the critical memo issued on January 19, 2021, wherein all documents related to the Crossfire Hurricane investigation were declassified by Trump in the waning days of his presidency.

Damning political documents that make the Obama administration look bad are declassified—and then, the feds knock down the door at Mar-a-Lago. And now, we have memos showing that certain documents were either declassified or that none were present at Trump’s home. It looks like this circus just added another tent.

But what if this isn't really about document classification. It's beginning to look suspiciously like the Biden/Garland DOJ is looking to hang him with the Presidential Records act. Tristan Justice at Da Fed, FBI Raid Warrant Demanded Seizure Of Literally Any Record Trump Ever Saw During 4-Year Presidential Term. Fox, FBI seizes privileged Trump records during raid; DOJ opposes request for independent review, "Some records seized at Trump's Mar-a-Lago home covered by attorney-client privilege, sources say." To the left, Trump has no attorney-client privilege, but Hillary is completely swaddled in it. Well, we're all pretty sure they were hoping to sweep in some J6 material too. WaPoo has a large, heavily slanted (but then, it's WaPoo) article on Trump’s secrets: How a records dispute led the FBI to search Mar-a-Lago. But let's get to the real meat of this argument, at Twitter thread at Twitchy by Margot Cleveland, Margot Cleveland examines why the DOJ selected the statues it did for raid on Mar-a-Lago Margot Cleveland@ProfMJCleveland "7/ And whether classified or not, the second statute cited, seems to make Trump taking anything that is considered "Presidential Papers" from White House, whether classified or not; whether the archivest (sp?) has a copy or not."

Of course, my problem with this gets back to the historical practice of ex-Presidents keeping their personal papers for historical and personal reasons, a practice which seems to be codified by giving ex-presidents an office of the ex-presidency, staff, security clearances, and secure conditions:

All former Presidents get a federally funded office.

Office of the Former President

Even if Trump had classified records, they were protected.

So, even if they were removed from the White House, one can easily argue that they were not, in fact, removed from the governments possession. But as YaHoo! is anxious to point out, A Trump Indictment Over Mishandling Classified Documents Is Now a Very Real Possibility. Sundance at CTH opaquely warns Big Picture, Review all DC Activity from June 3rd with New Eyes "As noted by President Trump and numerous lawyers in/around his office, the U.S. Dept of Justice and FBI visited Mar-a-Lago on June 3, 2022, to review presidential documents kept in storage boxes there.  After that visit the next contact with DOJ and FBI officials was the raid on August 8th." Finally, Athena Thorne at PJ Media warns, Yes, They're Going to Arrest Donald Trump. Deal With It.


So, yes, sooner or later, someone will get a grand jury or a judge to indict Donald Trump for something or other. Remember — they impeached him twice. Impeachment is a Congressional indictment, so this isn’t exactly a new concept to the Left. Once Trump is indicted, why would they stop there? The next step is to swear out an arrest warrant. At the very least, the former president will need to turn himself in, which will produce the coveted mugshot. Or, if someone especially vindictive gets there first, expect a full-on perp walk arrest. There’s no reason to think the FBI’s needless public arrest of former Trump advisor Peter Navarro was a one-off exercise.

We have to accept the probability and be ready for it when it happens.

If and when Leftist goblins arrest former president Trump, here’s the first thing to which we must all commit: We will not erupt into violence. If the anti-American forces succeed in goading the United States into a civil war, we’re over and done. You may as well start brushing up on your Mandarin now, if you think a hot civil war will work out well for us. There are still ways to get out of this mess without breaking the emergency glass yet. 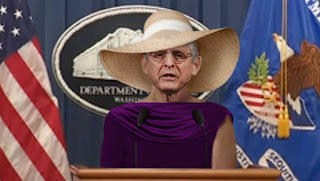 The Babylon Bee  'The FBI Raid On Melania's Closet Was Justified,' Says Merrick Garland Wearing Gorgeous New Evening Gown And Sun Hat, also AOC Says It's Dumb For Republicans To Call U.S. A Banana Republic Since It's More Like A Forever 21.

From ET, ‘Witch Hunt’: Trump Criticizes Biden White House Over Mar-a-Lago Raid, but at the NYT Althouse finds "The country is on fire. What can I do to reduce the heat?" "That was the message Trump conveyed to Attorney General Merrick B. Garland, just before Garland made his public statement that he personally authorized the Mar-a-Lago raid and characterized it as a last resort." Jim Thompson at Red State notes DOJ Pokes Another Stick in Trump's Eye - It Will Retry a Man Donald Trump Granted Clemency To. 'Streif' at Red State examines the hypocrisy of President Trump and Breitbart Accused of "Doxxing" FBI Agents Who Signed a Public Document

A search warrant is a public document. The proof of that is that President Trump was given a copy and encouraged by the intellectual left to make it public. I don’t have any sympathy for anyone involved in this assault on our Republic. While I don’t wish them physical harm, I don’t have a problem with them being peacefully, if loudly, confronted at home or while shopping or dining out. That’s the standard.

Insty has a long citation from ROGER KIMBALL: A Token of the Managerial Age Bewails Trump’s Surge: David Brooks is very worried the FBI’s raid of Mar-a-Lago helps Trump.


The reason, by the way, my friend’s words about Merrick Garland were “delighted” was because of the huge, if inadvertent, boost the attorney general has just given to Donald Trump’s political prospects.

Monday’s FBI raid on Mar-a-Lago, Trump’s Palm Beach residence, was probably the single biggest boon to his stature among voters since he left office in January 2021, bigger even than the partisan witch hunt over which future CNN hostess, Liz Cheney, has been presiding with such ostentatious zeal.

This is obviously a concern among the beautiful, well-pressed people with white collars and clean fingernails who hate Trump. Employing a ju-ju they recognize but do not understand, Trump has time and again demonstrated an uncanny ability to goad his would-be attackers into contortions of self-immolation.

Is that happening now? Maybe. My friend thinks so, hence his buoyant mood and affectionate feelings about the attorney general.

A lot of other people think so, too, though for many the apparently rising fortunes of Donald Trump are not something to celebrate but something to abominate. A good example of the latter was just provided by David Brooks, successfully housebroken faux-conservative columnist for our former paper of record, the New York Times.

At Da Fed, Margot Cleveland hears  FBI Director Call Legit Criticism Of Corrupt FBI ‘Violence,’ But We Weren’t Born Yesterday, Jordan Boyd sees Christopher Wray Torched On Twitter For Scolding Those Who Dare Question FBI Credibility and Elle Reynolds watches Grassley To Wray: Why Is There One Law For Hunter Biden And Hillary, Another For Trump? and notes Feds Suddenly Remember To Decry Threats Of Violence After Ignoring Violent Dobbs Backlash. It's one thing to attack Supreme Court Justices (as long as they're anti-abortion) and burn pregnancy centers, it's a whole lot worse to say bad things about the FBI! Via Insty, HOWIE CARR KNOWS WHERE THE BODIES ARE BURIED: Howie Carr: FBI Mar-a-Lago raid an example of corruption pace long ago set by Boston division. At Althouse, "Normally I would believe the FBI, but I have lost all trust in them. I don't like Baldwin, but the FBI has no ethics anymore." "Can't trust anything they say. All local police departments have overseeing agencies, like Internal Affairs, Civilian Complaint Review Board, Inspector General etc, who do [you] call to make a complaint on an FBI agent?"" At ET, Congressman Perry Gets Phone Back From FBI, Unclear About Motives Behind Seizure. Pure intimidation.

On Aug. 9, a day after raiding former President Donald Trump’s Mar-a-Lago home in Florida, FBI agents had taken Perry’s phone as part of a separate investigation. At the time, Perry was traveling with his family. Speaking to “Capitol Report” on NTD News, the GOP member confirmed that he has received his phone.

He is still uninformed as to why the phone was confiscated by the FBI. However, Perry was informed by his attorneys that he was not a target of the FBI’s investigation.

Also at ET, a rather puzzling article about Ray Epps and his role on J5 and J6.  Ray Epps Told FBI He Expected a Bomb Attack Near the Capitol on January 6, Documents Show, "Epps admitted to trespassing, directing protesters to go into the Capitol. 'I wish I could take that back,' he told agents." So why wasn't he arrested and incarcerated like all the other trespassers? Why did he strike up friendships with Liz Cheney and Adam Kinzinger?

The walls are closing in! Twitchy, Newly released government documents show Donald Trump scratched the floor of the Lincoln Memorial in 2020  "We’re suddenly supposed to care about this when the Left spent the entire Trump administration trying to tear down statues of historical American figures, including Abraham Lincoln in the form of the Emancipation Monument. Oh, and it was a Fox News event, which makes it even worse."

Epstein's victims name Bruce Reinhart in their crime victims rights act case against the government, accusing him of using inside Justice Department info when he switched sides to work for Epstein https://t.co/EvggrSoZOV

Ryan King at WaEx, Elaine Chao and other Trump Cabinet members cooperate with Jan. 6 committee. It's not like Mitch McConnel (Chao's husband) is actually Trumps' buddy. At HuffPo, Mary Papenfus (love that name!) claims Some Trump Allies Reportedly Are Trying To 'Go Dark' Amid Search Warrant Revelations.
Posted by Fritz at 11:27 AM