So what's happening on this sultry Sunday? Well, ET notes Biden Tests Negative for COVID, for the second time. Did he take Paxlovid for the rebound (against its recommended use), so maybe, just maybe he can rebound yet again, and continue "working from isolation" indefinitely? In any event, Sundance hears a Report that Joe Biden Likely to Extend National COVID Emergency Declaration – To Facilitate Mail-in Ballots and Harvesting? I guess Monkey Pox wasn't working out right.

At NYPo, Larry Elder teases presidential run at CPAC. I hope it's just a tease.

Newt Gingrich touts Trump’s Triumphant Endorsements. But the media are trying to make the most of his few off picks. WaPoo, Newhouse, who voted to impeach Trump, will advance to general election in Washington district, AP projects. Washington State? I'm shocked. "Meanwhile, in the neighboring 3rd District, Rep. Jaime Herrera Beutler (R) was in a tight contest with Joe Kent, a Trump-endorsed veteran who has called people arrested in the Jan. 6 investigation “political prisoners.”" ET, Impeachment Republican Wins Primary With Weakened Advantage. At WSJ, cited at Haut Hair Joe Epstein claims I don't donate to politicians, but I will to Liz Cheney. He can be chair of Democrats for Cheney. A last gasp from AllahPundit at Haut Hair, GOP Senate nominee in Colorado goes there: I don't want to see Trump as president again. "By distancing himself from Trump, O’Dea is engaged in basic good-sense brand-building in an inhospitable state." Will his next gig be NR, the Bulwark or the Dispatch? Nate Silver at 538 tries to dress as well known phenomenon as something new, It’s Hard To Win A Senate Race When You’ve Never Won An Election Before. Pew reports Majority of Americans continue to favor moving away from Electoral College. Just try getting the small states to sign on to that amendment.

Insty cites Eli Lake at the WSJ, WHAT JOHN DURHAM HAS PROVED:


If the only damage done by the Steele dossier had been to inject disinformation into American political discourse, there would only be a medium-level scandal. But Comey and the FBI took the dossier seriously, despite never verifying it. Comey himself, according to the Senate Intelligence Committee, personally lobbied — over the objections of CIA analysts — to include allegations from the dossier in a US intelligence assessment of Russia’s influence over the 2016 election. And when Comey briefed congressional leaders and the Justice Department in March 2017, we know from recently declassified FBI talking points, it was claimed that some of the dossier had already been corroborated and that it derived from a Russia-based source, when in fact Danchenko was a US resident at the time. By that point, the FBI had already conducted one interview with Danchenko — and he had begun to walk back some of the dossier’s claims. In other words, Comey presented the Steele dossier as credible information to Congress, just as lower-level agents were learning it was not to be trusted.

Savor the irony. Clinton has claimed that Comey’s October email surprise cast a cloud over her campaign that cost her the election. Meanwhile, Clinton’s agents fed the bureau enough thinly sourced dirt on Trump and Russia to cast doubts over his whole presidency. Comey only let the fog linger over Clinton until November 6, when he announced that a review of Weiner’s laptop revealed nothing incriminating. The miasma over Trump’s presidency lingered for two and a half years, until Mueller announced he had found no evidence of conspiracy between Russia and the Trump campaign. To this day, most Democrats still don’t believe that and ignore how that conspiracy theory was first whispered by their party’s own lawyers and operatives.

From Jon Levine at NYPo, Jan. 6 ‘prison’ exhibit at CPAC causes stir "The exhibit organizer — who also played the role of the prisoner — was Brandon Straka. The one-time New York City hair stylist rebranded as a pro-Trump activist and founder of nonprofit Walk Away Foundation which encourages people to leave the Democratic party . . .Straka himself plead guilty to misdemeanor disorderly conduct for his participation on Jan. 6 and was sentenced to three years probation and a $5,000 fine."

And here's the part of the discussion on *why* the Cheneys -- with the Bushes -- hate Trump so much. It's not because they're noble patriots who cherish the rule of law (😱).

It's because Trump ran - and won - denouncing their neoconservative worldview, now the Dem worldview: pic.twitter.com/hYUhtGwE5V

AllahPundit, "This is our January 6 moment": Florida Dems freak out at DeSantis for suspending prosecutor
Red State reports a Naked 80-Year-Old Protests a Biological Male in Her YMCA Shower, Gets Banned for Bigotry. Forget it Jake, it's Washington state. Breitbart, Disney Won’t Say Gay in Middle East: Censors LGBTQ Content in Gulf Countries While Fighting Florida Law. If you don't like their principles, don't worry, they have more. At the Delaware Valley Journal, Push for Radical Gender Policies in K-12 Education a Top-Down Effort, Mastriano Says

“Once again, Gov. Tom Wolf’s administration skirts the legislative process to implement a far-left agenda behind the backs of the 13 million Pennsylvanians,” Mastriano said in a statement. “These guidelines encourage school districts to proselytize radical ideas about gender identity to children in all grades, all under the guise of school safety.

“The department touts the left’s twisted vernacular as objective fact, while the governor’s Democratic allies demonize parents as too bigoted to teach their own children about these sensitive topics,” Mastriano said. “We can teach kids to be tolerant, accepting, and kind to others – no matter what – without indoctrinating an entire generation.”

At the National Desk, Diversity czar for Connecticut school district slammed for retweets attacking White people. Jerry Newcombe at Town Hall is concerned that we are Falsely Teaching Our Children That America is Evil

Last night, the Senate broke a 50-50 deadlock to advance landmark climate, tax, health bill, on a party line vote, 51-50, with Kamala Harris doing her only job, cast thing the tie-breaking vote. The actual vote on the measure is supposed to happen today.  Democrats had to ignore likelihood that one or more of their member was carrying WuFlu, AllahPundit, "Bring your ventilator": Dems adopting "don't test, don't tell" policy on COVID for BBB vote. At NYPo, Senate Dems skipping COVID testing to push spending bill vote: report. "Ironically, Schumer accused Senate Republicans of not taking COVID-19 seriously in the fall of 2020, when a spate of positive tests threatened to derail the confirmation of Supreme Court Justice Amy Coney Barrett."

At RSBN, Trump slams the Democrats’ reconciliation bill: ‘This is no time to raise taxes’. They gotta raise them while they can, before they lose the House. Joseph Klein at Front Page, The Mislabeled “Inflation Reduction Act of 2022”. At Based Politics, Even Bernie Sanders admits Biden’s ‘inflation reduction’ plan is a joke. The Peacock even allows Wilbur John Coleman, professor of economics at Duke University's Fuqua School of Business to say of Manchin's disingenuous claim about the new spending bill, "The Inflation Reduction Act isn’t just misnamed because it won’t do what its title promises — it will likely make inflation worse." Capt. Ed at Haut Hair, YouGov: Only 12% believe Schumer/Manchin/Sinema bill will reduce inflation. You can fool some of the people. Fox Business, Schumer calls economists 'wrong' who are cautioning Manchin's spending bill will increase inflation, "Schumer is firing back at hundreds of economic experts that say the Manchin tax and spending bill will increase inflation." David Harsanyi at Da Fed notes These ‘Economists Say’ Whatever Democrats Want Them To Say. At HE. JOBOB says Biden's Ministry of Truth Is Alive and Well. A willing propagandist is rarely without employment. Jazz Shaw at Haut Hair VIP, "Inflation Reduction Act" would make IRS among the largest agencies in government. Do you really think they'll be content to only go after the rich guys? Insty, TARGETING THEIR DOMESTIC ENEMIES: Dems Poised To Make IRS Larger Than Pentagon, State Department, FBI, and Border Patrol Combined: Manchin-backed Inflation Reduction Act would more than double agency’s size. "This isn’t about revenue."

The Weasel Zippers note As Economy Shrinks Two Quarters In A Row, WH Spox Says We’re In “Transition” To “Stable And Steady Growth.” At Am Great S.T. Karnick claims Federal Reserve’s False Assumptions Push the Economy into Recession. At WSJ, Try Not to Think of a Recession, "Biden administration denials are bound to deliver the opposite of the intended message." Mike LaChance at LI, Poll Finds Voters Blame Biden and Dems for Recession, Despite White House Spin,  “Democrats inherited an economy that was primed for an historic comeback, and promptly ran it straight into the ground.” Ace, New York Times Publishes Op-Ed From 25-Year-Old Female "Economics Influencer" Absolving Biden of Blame for Economy and Instead Putting It Where It Belongs: On the "Bad Vibes" The Public Is Putting Out About the Economy, Man, "She says we're not in a recession. Just a "vibe-cession."

So, one of the big things that allows Democrats to claim with a straight face that we are not in a recession is a booming jobs market, but there's something funny going on there too. At JTN, Hidden reality of new jobs report: Americans taking side gigs to make ends meet amid soaring costs, ""Collapsing real wages force many workers to moonlight to pay the bills," said economist Peter Schiff." Wa Free Bee, Unemployment Benefit Claims Tick Up in New Sign of Shaky Economy, Labor Department Report Finds, "Jobless benefit claims rise after administration touts strong labor market." Zero Hedge, Something Snaps In The Job Market: Multiple Jobholders Hit All Time High As Unexplained 1.8 Million Jobs Gap Emerges 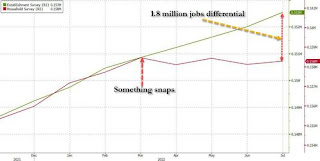 Well, those who read our article from last month will know what's coming next. Those who haven't, will be surprised to learn that something appears to have snapped a few months ago, around March, when the Establishment Survey kept on rising unperturbed, while the Household Survey hit some unexplained brick wall, and hasn't moved at all.

In fact, since March, the Establishment Survey shows a gain of 1.680 million jobs while the Household Survey shows an employment loss of 168K!
. . .
So what's going on here? The simple answer: Fewer people working, but more people working more than one job, a rotation which picked up in earnest some time in March and which has only been captured by the Household survey.

Paul Krause at Am Think thinks about The Meaning of Bidenomics. John Mauldin, Weirdness Factors,

It’s a recession! No, not yet! I see these arguments everywhere and I’m already tired of them. For those who believe it is not yet a recession, I will make a deal with you. The third quarter is likely to be negative. When we have three quarters of a recession in a row, just give it up.

Here’s what we know: Inflation is rising, growth is weakening, and the Fed is tightening. All these seem likely to persist, though to varying degrees and with occasional breaks. That means recession is coming, if not already here.

Twitchy, ‘BACK to reality’ … Catturd ™ takes Hillary Clinton and her ridiculous tweet thanking Biden for a bunch of RAD things APART point by brutal point

Gas is up $2.00 per gallon under Biden.
Inflation is at a 40 year high.
The economy is in shambles.
The border is wide open
- and the Democrats are going to pass a bill that'll destroy the economy further - and add 84,000 IRS agents.