They're Always in the Last Place You Look

Like a Chinese pet shop. WUWT, Turtles: Back to the Future! 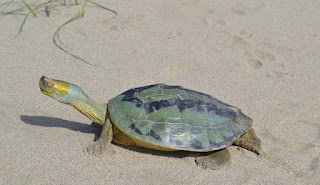 This is a Burmese Roofed Turtle – thought to be extinct until it was re-discovered in 2002. According to the Wiki: “The female turtle grows significantly larger than the male and reaches sizes similar to that of a steering wheel; the males’ color transforms during breeding season in which their usually green heads turn a bright chartreuse-yellow with bold black markings”. It lives in Myanmar (once known as Burma). Almost all turtles are under some negative population pressures, but according to an article in the NY Times, especially “Asian species, which are pummeled by both habitat loss and high levels of hunting for food, medicine and the pet trade.”

The beleaguered Burmese Roofed Turtle has a distinct disadvantage – it is found only in Myanmar, a very poor country – 25% of the population is officially poor, making less than US$ 1.20 per day. Despite the numbers, this is an improvement. [ source – World Bank – 2017 report .pdf ] In addition, because the female turtle grows to “sizes similar to that of a steering wheel” – she becomes a very tempting target for bush food hunters who nearly drove the species to extinction.

“Conservationists are not known for delivering a lot of good news. But in the Burmese roofed turtle — a giant Asian river turtle whose bug-eyed face is naturally set in a goofy grin — they have cause for celebration. Just 20 years ago, the species was presumed extinct. But after rediscovering a handful of surviving animals, scientists have grown the population to nearly 1,000 animals in captivity, some of which have been successfully released into the wild in Myanmar over the past five years.” 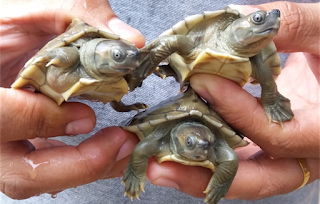 This smiling cutie was saved by serendipity:

“When the species showed up in a pet shop in Hong Kong, it raised a lot of eyebrows,” said Rick Hudson, president of the Turtle Survival Alliance. “There were a number of local dealers smuggling star tortoises out of Burma at that time, so we just assumed it had been smuggled out by the same traders.”

Encouraged by these developments, Gerald Kuchling, a biologist now at the University of Western Australia, secured permission to initiate a joint expedition with the Myanmar Forest Department to survey the upper Chindwin River, where an American expedition in the 1930s had collected Burmese roofed turtles. . . .

Eating turtles may sound a little off to current Western tastes, but turtle soup made from Maryland's famous Diamondback Terrapin  (hence the Terps) was quite a thing back in the day. In fact, the fishery extended into recent times, with most of the catch being sent to China. And the population of them has rebounded nicely after the trapping was banned.