Russiagate Blowing in the Wind

I'm supposed to be fishing today, but we were delayed on account of the wind. It's supposed to let off by 10 AM though; here's hoping.

A reminder from NYPo  how Members of Mueller’s team ‘wiped’ phones during Trump probe: DOJ  From the Epoch Times, Wiping Phones and Erasing the Public’s Trust

The 33,000 emails that Hillary had wiped from her home-brew server were entirely private, she said, having to do with yoga classes and her daughter’s wedding. Then why resort to professional data wiping software? Why pretend not to know what it means to “wipe” a computer server? (“You mean with a cloth?”) Why instruct your minions to destroy your smart phones with a hammer?

Nothing happened to Hillary because she occupies a zone of privilege even more exalted than that occupied by Speaker Pelosi.

What about Robert Mueller’s Merry Band of Pranksters and their repristinated phones? What happens to them? Sidney Powell, the indefatigable attorney for Michael Flynn, has charged that their actions constitute “obstruction of justice and destruction of evidence of the worst sort.” That of course is for a court to say.

But the optics, I think we can agree, are not good. 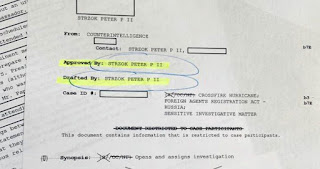 Catherine Herridge obtained an Electronic Communication (EC) via Judicial Watch which announced the launch of the Crossfire Hurricane investigation. The memo was drafted by Trump-hating FBI agent Peter Strzok and also states it was approved by Strzok. Herridge suggests that may be a problem.

“Former senior FBI agent tells @CBSNews that same person drafting + signing off on an ‘EC’ is unusual + may violate the ‘DIOG’ or Domestic Investigations Operations Guide which is the roadmap/rule book for FBI agents. Based on “DIOG, Crossfire Hurricane appears to fall under ‘Sensitive Investigative Matter’ because it involved a political candidate/organization – DIOG states these cases should be brought to attention ‘FBI HQ + other DOJ officials’

According to the IG report, Strzok's immediate boss, Bill Priestap authorized the investigation . . .

That seems straightforward enough but if Priestap approved the investigation why isn’t his name on the EC? Isn’t that what the “approved by” line is there for? Maybe there’s a perfectly reasonable answer to that question based on how the FBI normally does its paperwork, but given the significance of this document it’s worth asking. The document really does make it look as if Strzok approved his own draft.

It’s also worth keeping in mind that both AG Barr and John Durham said last December that they had disagreements with IG Horowitz on exactly this point, i.e whether or not the opening of the investigation was properly predicated:

And from the Dept of About Damned Time, Chuck Ross at Da Caller Reports  GOP Senate Chairman Seeks Subpoena For ‘Spygate’ Professor

Sen. Ron Johnson, the chairman of the Senate Homeland Security Committee, is seeking authority to subpoena Stefan Halper, the former Cambridge professor who worked as an FBI confidential source during the Trump-Russia probe.

The Senate panel will hold a vote Wednesday regarding subpoenas for 41 witnesses Johnson wants to interview as part of a broad review of the FBI’s investigation of the Trump campaign and other intelligence-gathering activities regarding Trump associates.

The committee voted along party lines in June to authorize subpoenas to compel testimony from 35 witnesses. Politico published an updated list on Monday of witnesses Johnson’s wants to subpoena.

The list includes Halper and his FBI handling agent, Steven Somma. Michigan Sen. Gary Peters, the top Democrat on the committee, wrote in a letter to Johnson on Monday that he opposes granting the subpoenas.

Republicans have questioned the FBI’s relationship with Halper, who has worked for four Republican administrations.

Sundance at CTH is irate but not surprised as  Blazing Sunlight – Senate Intel Committee Refuses to Give GOP Senators Documents From Russia Investigation…. He's pretty well convince the SSCI was in on it all, and he may well be right.

Remember, if you hate Ric Grenell, it's because you're homophobic.
John Solomon at JTN, State Department reported Burisma paid bribe while Hunter Biden served on board, memos show. Hell, Hunter being on the board was a bribe.
The National Pulse, EXCLUSIVE: Obama Lawyers Fund ‘Transition Integrity’ Group Which Claims To Be ‘Non-Partisan’, Tied To Hunter Biden

Bassin previously headed the far-left Avaaz network, founded in turn by the leftist MoveOn.org group, as well as the Truman National Security Project, which has featured lead Joe Biden policy advisor Jake Sullivan and Joe Biden’s son Hunter Biden on its board.

The revelations destroy the Transition Integrity Project’s central tenet: that it is a non-partisan and independent organization that simply seeks to secure the fair results of the upcoming election.

The group has previously attempted to claim that it “takes no position on how Americans should cast their votes, or on the likely winner of the upcoming election.”

Abuse of non-profits is wide spread, and bipartisan, but it's only bad when Republicans do it.