How Big Was the Megalodon? 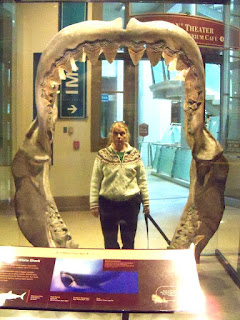 Pretty damn big, but science won't let it go at that: The Largest Shark to Have Ever Lived Was 52.5 Feet Long, Researchers Confirm. I just love the precision implied by 3 significant figures. Are they sure one didn't grow to 53 feet? We don't even know how big many modern fish get to the last half foot, let alone fossils.

After the researchers studied the build and size of five ecologically and physiologically similar surviving shark relatives (the shortfin mako, the longfin mako, the salmon shark, the porbeagle, and of course, the great white), they deduced that a 52.5-foot long megalodon likely had the following measurements: a 15.3-foot-long head, a 5.3-foot-tall dorsal fin, and a 12.6-foot-high tail. As The Guardian points out, “this means an adult human could stand on the back of the shark and be about the same height as the dorsal fin.”

Georgia standing in the reconstruction of a Megalodon jaw at the Smithsonian Natural History Museum.

Up until now, we’ve been trying to size up the meg based almost exclusively on a few fossils, including their teeth and the anatomy of sharks from the same lineage, like the great white (Carcharodon carcharias). But those figures were always estimates. And it turns out the meg was actually more closely related to a mako shark ancestor.

In addition to the bracketing, the scientists used linear models and geometric morphometric analyses to create a 2D megalodon reconstruction.

I just love the diver for scale. But it should be a surfer. 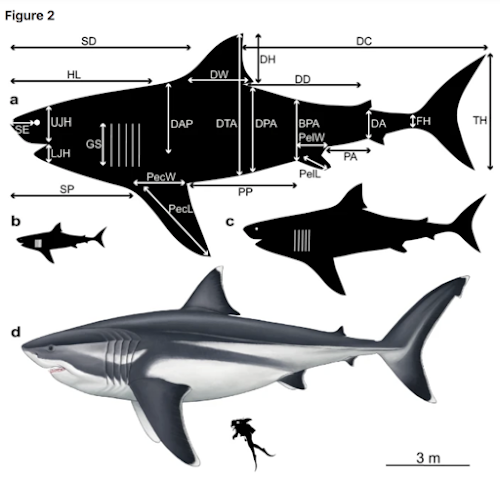 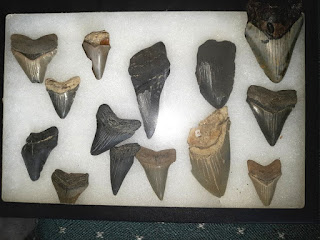 The megalodon, which had a solid 13 million-year run as king of the sea, went extinct around 3.6 million years ago. Since the meg’s body was mostly comprised of cartilage, which does not fossilize, scientists have been using the shark’s sizable teeth (some surpassing 7 inches top to bottom), vertebrae, and poop fossils to figure out the meg’s body measurements.

To the right, the best of our Megalodon teeth.
Posted by Fritz at 4:14 PM