The Notorious RBG Dead at 87

Doesn't that throw a bunch of monkey wrenches into the political machinery?

Justice Ruth Bader Ginsburg died this evening of complications from pancreatic cancer. She was 87. pic.twitter.com/D4DnIXux0l 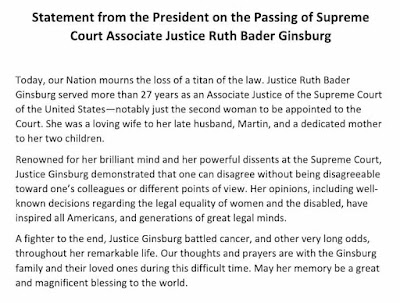 If they even TRY to replace RBG we burn the entire fucking thing down.

Justice Ginsburg dictated a statement before her death: "My most fervent wish is that I will not be replaced until a new president is installed." https://t.co/XLzhPiLSng


Murkowski, Romney, and Collins all coordinate their Democrat votes/statements.

McCain used to do it when he wasn't in Hell yet.

All the liberal "Republicans" play this game, working out who is "safe" to stab the party in the back this time.

Murkowski made this announcement because Collins doesn't want to vote on a new nominee -- but she can't afford to say that with an election coming up, and in a tough race.

Republicans would abandon her and she would lose.

So instead: Lisa Murkowski tries to kill the vote. She's not running for reelection this year.

But they're all in it together.

Biden looked up from his notes only three times, each time looking completely confused and overwhelmed. He stumbled over his words and looked unsure about what he was saying, which is stunning considering that Biden has known her personally for decades.

Biden’s performance tonight was a stark illustration of his woefully inadequate mental capabilities and a real-life demonstration for the American people of how President Joe Biden would handle a crisis situation.

Well, this certainly raises the stakes for Nov. 3.

UPDATE: Ace has some thoughts here.

You know what I hate? Confrontation.

Like, I would never agree to be part of a “counter-protest.” If somebody is having a rally, let ’em have their rally, and if you disagree, go organize your own rally. Don’t show up at somebody else’s event to do an “in your face” protest against them having an event. The reason I mention this is because the whole protest/counter-protest dynamic has been so normalized during the past 15 or 20 years that we just take it for granted and now — now — we’re going to have the Mother of All Battles over the nomination to replace Ginsburg.

From the Wombat's In The Mailbox: 09.18.20, David Post at the Volokh Conspiracy, RBG, R.I.P. "A few personal reminiscences on the death of Justice Ruth Bader Ginsburg"

Althouse, Ruth Bader Ginsburg has died! and Will Trump and the GOP Senate get a new Justice confirmed before the election?

My first thought was that they won't even try. They'll use the open seat as a political issue — an argument why it is so important to reelect Trump and to keep a GOP majority in the Senate. And the backup plan can be that if Trump loses, they can accomplish the appointment after the election, before the new Senate and President are sworn in. So what if they said something else before the election?!

But then — in discussion here at Meadhouse — the thought came up that this election could be contested. There's so much talk about election fraud and mail-in voting, that there could be Bush v. Gore type litigation arising in various states, and the outcome of the election could well depend on that. Right now, the Supreme Court has only 8 Justices, and though there are presently 5 conservatives and only 3 liberals, a 4-4 tie is possible, with one vote switch, and Trump might want his person on the Court to lock in a conservative majority.

The 2020 election is officially in hyper-drive…