Just not very much: Relief is coming for Virginia fisheries, although payments likely won’t be large

Fisheries managers are close to being able to roll out relief for Virginia’s hard-hit fishing industries, although a small federal allocation to the commonwealth means payments aren’t likely to be large, Virginia Marine Resources Commission officials said Tuesday morning.

“Because there was so little funding and such great economic damage, the idea of sort of trying to make sure you make up the loss for people was not an option on the table,” VMRC Deputy Commissioner Ellen Bolen said during a presentation to the commission. “We just did not have enough money.”

Virginia’s fisheries have been pummeled by the COVID-19 pandemic, particularly as restaurants, one of their primary customers, have shuttered or severely curtailed their business. Officials have estimated direct losses to the industry of at least $100 to $120 million, not accounting for trickle-down effects to associated business like boat-building.

But of the $300 million the Coronavirus Aid, Relief, and Economic Security Act directed to U.S. fisheries, only $4.48 million was allotted to Virginia. The small allocation drew ire from Virginia leaders, with Secretary of Natural Resources Matt Strickler saying it fell “woefully short” of the state’s needs.

On Tuesday, officials repeatedly noted the scarcity of funds, which are funneled from the National Oceanic and Atmospheric Administration.

“We tried to do the best we could with what we had to work with, which was not a whole lot of money,” said VMRC Commissioner Steve Bowman. “Maine got $20 million. Even Georgia and South Carolina, I think, did fairly well. It was a really weird computation that they came up with.”

The final fisheries relief plan devised by the commission after consultation with a working group and public input will make $3.98 million in direct payments available to eligible holders of a VMRC license. An additional $500,000 will be available for eligible applicants who do not have such a license.

Other criteria for eligibility include Virginia residence and certification both that economic losses were greater than 35 percent compared to a previous five-year average and that at least 50 percent of the applicant’s income comes from fishing activities.

“We wanted to make sure that the people who were getting the money were people who were actually fishing and who relied on the fishing industry as their primary source of income,” said Bolen.

I hadn't realized how badly the fishing industry was hit, but I do see a sudden upturn in the amount of crabbing off the beach. You can see all the buoys for crab pots in the bay behind "Whitey," slightly out of focus. 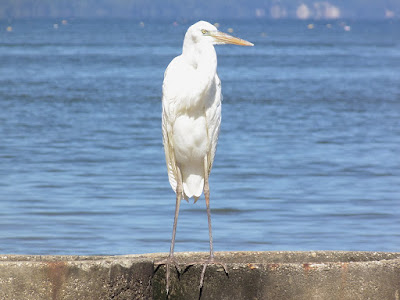