The World Will Not End in Fire Or Ice! 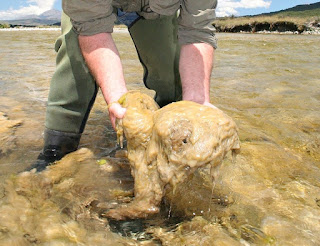 It's gonna end with Rock Snot: Rock snot discovered in another Pennsylvania waterway


Rock snot, an invasive aquatic alga, has been discovered in another Pennsylvania stream.

According to the Pennsylvania Fish and Boat Commission, Didymospheria geminata has been confirmed in Quemahoning Creek in Somerset County.

The algae has been dubbed rock snot because of its appearance when wet. When squeezed dry, the tan to greenish beige alga feels like moist cotton or wool.
Didymo does not present a public health hazard, but it can cause ecological damage by smothering other organisms which also live on the riverbed and support the food web for the resident fish community. 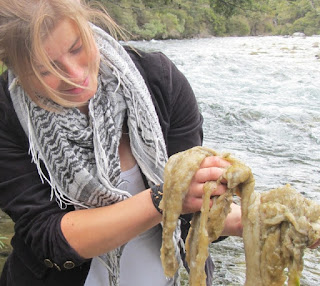 In response to the discovery, the commission and the Pennsylvania Department of Environmental Protection have reminded anglers and boaters that cleaning their gear is the easiest, most effective means to prevent its spread to other waters.

“We may not be able to eliminate didymo from infected waterways, but there are things we can do to slow or prevent its spread to other waters,” said Heather Smiles, chief of the commission’s Division of Environmental Services.

Didymo cells can easily be carried downstream and can be picked up by any items or equipment in contact with infected water including fishing tackle, waders, recreational equipment, boats and trailers.

It takes just one live didymo cell to start a new colony of the alga.

Which is why it will be terribly difficult to prevent Didymo from spreading. My guess, from years of growing algae for work, is that the streams that are affected are also affected by nutrient pollution, and in the long run, control of the nutrient pollution will be the most effective means of control.

Fortunately, Didymo is a freshwater diatom, and will not survive in most of Chesapeake Bay.
Posted by Fritz at 4:04 PM