So, did anything exciting happen while we were off, cruising Alaska, and meeting family in gold country? It seems like I did read a few articles, but nothing stood out as great progress, so I guess I'll just start on the fly.

On the subject of Michael Flynn's sentencing, George Parry at AmSpec says Michael Flynn Graymails the Government "Will the FBI risk disclosure of its dirty tactics in its persecution of Michael Flynn? Flynn’s new lawyer thinks it won’t." It couldn't happen to nicer people:


So why and how was Flynn targeted for destruction by the FBI and Justice Department? Powell’s discovery motion seeks answers to these questions by demanding the production of evidence exposing the links between the investigation and prosecution of Flynn to the Obama administration’s efforts to target, spy on, and frame Donald Trump. To that end, the motion requests that Judge Sullivan enter an order compelling the government to produce a range of exculpatory evidence including, but not limited to, the following:

“Any and all evidence that during a senior-attended FBI meeting or video conference, Andrew McCabe said, ‘First we f–k Flynn, then we f–k Trump,’ or words to that effect….

“The unredacted Page-Strzok text messages as well as text messages, emails and other electronic communications to, from, or between Andrew McCabe, James Comey, Rod Rosenstein, Bruce Ohr, Nellie Ohr … Andrew Weissmann … regarding Mr. Flynn or the FISA applications or any surveillance (legal or illegal) that would have reached Mr. Flynn’s communications….
. . .
The list goes on, but you get the idea. The motion indicates that, far from conducting a fishing expedition, the defense is aware of highly embarrassing and potentially incriminating activities by officials of the FBI, Justice Department, and Special Counsel’s Office and wants the documents, recordings, and other evidence pertaining to those matters.

In her public comments, Powell has stated that she hopes to have Judge Sullivan dismiss the case against Flynn based on the government’s misconduct in hiding exculpatory evidence. Just so. But to those of us familiar with the dark art of graymail extortion, it is apparent that the motion has been carefully crafted and calculated to scare the bejesus out of the government at the mere possibility that Judge Sullivan might actually order production of even a small fraction of the demanded discovery.

Moreover, if Judge Sullivan grants the defense even partial relief, the prosecutors will then be faced with a bitter choice, to wit:

(a) They can produce the damning evidence of the government’s corrupt activities in order to continue the prosecution of their ludicrous and petty false statements case against Flynn. Or (b) the prosecutors can do the smart thing by dropping the charges and quietly disappearing into the witness protection program.


The report revealed that Comey and the FBI hatched a plan before the briefing about how to use the one-on-one session in order to collect information from Trump for an investigation into whether the campaign worked with Russia to influence the election.

The report said that FBI witnesses told the inspector general’s office that top officials strategized about the briefing ahead of time. And after the meeting, Comey typed up notes and held a video conference call with other FBI officials back at bureau headquarters to discuss what Trump said.

Comey also shared his memo with the FBI counterintelligence team working the Trump-Russia probe, saying that it should be included in the investigative file. The report also said that Comey told FBI officials that the information from Trump should be treated as if it were derived under the Foreign Intelligence Surveillance Act, or FISA. 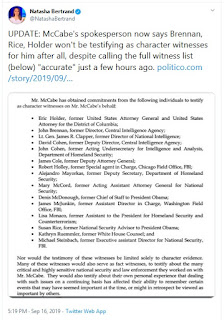 From sundance at CTH, McCabe’s Lawyers Say: Obama’s Team Will Defend Him – Obama’s Team Say: ‘What, Huh’? I'm pretty sure that McCabe's lawyers will try the black mail tactic too. But most of the people he would have dirt on are already gone, too.

You just can’t make this stuff up folks.

But will there be accountability? Brian Cates at ET, Without Accountability, There Can Never Be Trust in Our Government

Unless this behavior is punished with the utmost severity, no one will ever be able to place trust in the federal government. The ball of accountability will soon end up in the court of U.S. Attorney General William Barr.

If the big plan of President Donald Trump and Barr here is to fully expose what the Spygate plotters did, but then let them all walk away without any consequences—as some people are claiming—then they are planning to undermine the government they’ve been entrusted with safekeeping. It would be a stunning dereliction of duty.

Nobody would know better than Trump what it would mean to let all the criminals who tried to sabotage him just walk away. Endless bluster about restoring the rule of law and faith in the institutions of the U.S. federal government would be demonstrated to be nothing but hot air.She says reads it so well.

Go to the site and let Gina Shakespeare read it all to you.

From the Wombat's In The Mailbox: 09.17.19,  the Weasel Zippers laughs as Lewandowski Derails Impeachment Hearing By Refusing To Answer Questions Without Copy Of Mueller Report, and Twitchy: Corey Lewandowski Trolls Duke Nukem By Calling Him “President Swalwell” At Hearing and from Chuck Ross at Da Caller, White House Restricts Corey Lewandowski’s House Testimony

Back in the mix at Wombat's Rule 5 Sunday: Cecile Haussernot and FMJRA 2.0: Crazee Horse.
Posted by Fritz at 8:29 AM