Before we skim into the extended coverage of Corey Lewandowski's congressional testimony, there are some new developments. First, John Sexton at Hot Air reports that Rep. Meadows complains that Comey’s Congressional Testimony At Odds With What He Told IG Horowitz, New Referral Needed.

“We’ve taken, now, your report and we’ve put it side by side [with] congressional testimony that James Comey made before the joint oversight and judiciary hearing and I’m finding just a number of irregularities,” Meadows said. He continued, “So would it be appropriate if ranking member Jordan and I were to refer those inconsistencies to the IG and if we did that would the IG look at those inconsistencies?”

“It’s certainly appropriate for us to get a referral about a then-employee of the department, which is I think the hearing you’re probably referencing, and then we would assess it,” Horowitz replied. 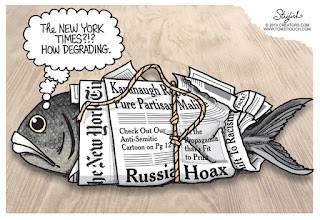 Lying to Congress is a crime? Who knew? Well, besides Michael Cohen, of course. At Town Hall, Jim Jordan Says Comey, Mueller, And Lewandowski Have Something In Common


"@CLewandowski_ worked with the Trump campaign for nearly 2 years. He testified they did not collude or coordinate with Russia. Sounds familiar. James Comey, sitting at the same table as Lewandowski: same answer. Bob Mueller: same table, same answer. Time to move on," Rep. Jordan tweeted.

From sundance at CTH, Louie Gohmert isn't exactly enamored of IG Horowitz either in Louie and The Cold Fish…

At AmThink, Thomas Lifson wonders Did FBI and CIA have an agent provocateur who tried to entrap the Trump Organization in a Russia deal? Felix Sater.


Judicial Watch is hot on the trail of a potentially explosive revelation: that an agent who had previously worked for the FBI and CIA  as an informant --  recruited by Andrew Weissmann in 1998! -- actively tried to set up a business deal between the Trump Organization and Russian interests, in order to implicate Trump with “collusion.”  In a press release, JW lays out the background of its new FOIA lawsuit seeking:

And so onto the coverage of the Lewandowski testimony, all sound and fury, and signifying nothing. We start with the Wombat's In The Mailbox: 09.18.19, who provides American Greatness's Lewandowski’s Contempt For A Contemptible Congress and Legal Insurrection: Corey Lewandowski Trolls Befuddled Democrats On Judiciary Committee.

Doing the rest the easy way; find something you like!

What were Dems thinking when they invited Corey Lewandowski to testify? - Hot Air

Democrats’ Impeachment Obsession Is a Danger to Democracy – American Greatness

Linked at Pirate's Cove in the weekly Sorta Blogless Sunday Pinup and linkfest.
Posted by Fritz at 8:40 AM