Russiagate: Impeachment Begins; Or Does It? 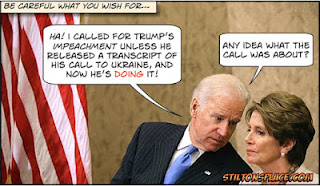 An anonymous, second or possibly even third hand whistleblower, represented by the DNC and Clinton mafia, and the Speaker of the house just announced a "formal impeachment inquiry", with no vote (although I'm fairly sure she has them). Have we entered terminally crazy politics? Stacy McCain Ukraine! Ukraine! Ukraine!

Everybody needs to calm the hell down. My expectation is that this latest “scandal” will prove to be nothing, and that it will end up hurting Democrats more than it hurts Trump. Be patient. 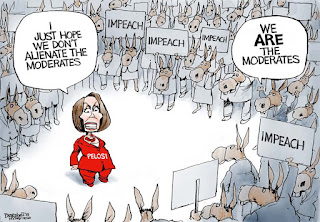 Ace, Pelosi to Announce Impeachment Inquiry; "Whistleblower" Being Represented by.... Former Schumer Staffer and Hillary Clinton Campaign Operative,  Andrew Bakaj, "This guy works for a firm that pays "whistleblowers" to lodge complaints against Trump." The Wire, Go Ahead and Guess Who the Lawyer for the Trump-Ukraine "Whistle-Blower" Is


"A senior Trump administration official told Fox News late Tuesday that the administration will release a document showing the intelligence community inspector general found the whistleblower who leveled an explosive accusation against President Trump concerning his talks with Ukraine had 'political bias' in favor of 'a rival candidate' of the president," Fox News reported. "The official did not identify the name of the rival candidate. Separately, a senior administration official told Fox News the White House has been working as quickly as it can to release to Congress the whistleblower complaint involving President Trump's conversations with the leader of Ukraine, as long as it's legally possible."


Devin Nunes on Ukraine whistleblower controversy: 'Doesn't it feel like Russia hoax all over again?' | Fox News. Sure does, same cast of characters.

Release the Ukraine transcript WSJ demands , Trump agrees, and liberals find fault Ace, Trump: I'm Releasing the Transcript of My Call with the President of Ukraine, Obama Official Jon Favreau: No! Don't Read the Transcript! It's a Trap!!! Bonchie as Red State, After Trump Calls Their Bluff On the Ukraine Transcript, The Left Hilariously Cry Foul and Rush to Move the Goalposts 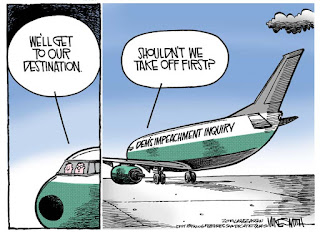 Ace, Impeachment Failure Theater? Democrats Wonder What Nancy Pelosi's Rhetoric Actually Accomplished, Althouse: How is it a "formal impeachment inquiry" when it was a "closed-door meeting" of only the Democratic Congress. Hot Air has Four reasons Trump might want to be impeached. Instapundit IMPEACHMENT: Less Than Meets the Eye. "It’s only been an hour, but already this impeachment process looks less like an actual congressional inquiry, and more like a sop to the growing Crazy Wing of Pelosi’s caucus." AllahPundit at Hot Air, Hillary: We should move towards impeaching this "corrupt human tornado." Comey: No, we shouldn't and "Terribly divisive": Tulsi Gabbard sounds like a no on impeachment. Sounds like a smart women. Democrats are lucky to have her.

Instead of "no collusion!" Trump now seems to be saying, so what if I did? - Hot Air, Trump is prepared to go to war against U.S. intelligence agencies - MarketWatch and not without cause. Not With a Bang, Donald Trump, Texas Hold’m and the Big Ukrainian Bluff

Da Beast. Ukraine Likely to Reopen Probe of Hunter Biden Firm, The Week Ukraine is expected to re-open the corruption case against Hunter Biden's firm. But it's not because of Trump. Hot Air, The whistleblower complaint may end up being worse for Joe Biden than Trump. Even the Washington Post is allowing notice of the Democrats’ double standard on Ukraine

The Wombat's In The Mailbox: 09.23.19 at The Other McCain brings us American Greatness: Trump Punks The Press On Biden And Ukraine and Weasel Zippers Flashback – Joe Biden Admits Strong-Arming Ukraine To Fire Prosecutor Investigating His Son, while his In The Mailbox: 09.24.19 has Twitchy: Nothing To See Here? Lawyer Representing Whistleblower Has Some Interesting Stuff On His Resume, JustOneMinute: I Can’t Take Any More, Legal Insurrection: Pelosi Caves, Announces Formal Impeachment Inquiry Into Trump and Weasel Zippers: Forget Biden’s Son, Now It’s Fauxcahontas’ Daughter Who’s Raising Eyebrows, 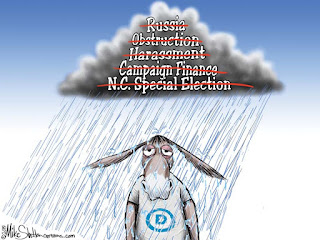 
One, distraction. They live in absolute fear of the coming revelations about the Russia probe, from Inspector General Horowitz but even more from the DOJ's John Durham, who can actually put people in jail. The Dems know -- if they have a brain (and a few do) -- these revelations are likely to point up the line at the leaders of the Democratic Party all the way to President Obama. They were all involved to one degree or another with illegally spying on or undermining Trump and his administration and supporters before and after the election. The extent of this we are only beginning to understand.

To put it mildly, not good. Whether you call this treason is up to you, but you can be sure Middle America (i. e. those elusive independent voters) will not appreciate it.

But there's something worse -- and Pelosi's knows it. The only hope for Democrats to defeat Trump is, remote and quixotic as it may be, impeachment. In the midst of the current brouhaha, Joe Biden -- their great (alas white male) hope -- is being exposed as not just a senile plagiarist, but a senile, corrupt plagiarist with a freaky family out of a Southern gothic novel with tentacles reaching into China and Ukraine. Again, not good.

Judge Napolitano at Fox News thinks Trump has admitted committing crime in talks with Ukraine, but he doesn't actually name a statute. He just really doesn't like it.