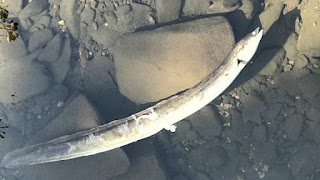 
A Baltimore City pipe filled with chlorinated water – left to flow for 72 hours into a Leakin Park stream – has caused a major fish kill.

The Maryland Department of the Environment (MDE) confirmed to The Brew that it has found about 2,000 dead fish in a tributary of the Gwynns Falls.

Canvassing the stream yesterday, The Brew saw mature eels, some 30 inches long, floating in Dead Run about a mile downstream from the pipe, located under the Ingleside Avenue bridge near Security Boulevard and Forest Park Avenue.

MDE spokesman Jay Apperson said the fish kill was caused by elevated levels of chlorination entering the stream from the broken pipe.

Yes, the amount of chlorine commonly used to disinfect drinking water is poisonous enough to kill fish. It's not harmful to humans or other animals who drink the water because our stomachs are much tougher than a fish's gills. And most natural waters contain enough organic compounds that will react with chlorine so that a small amount added to a lake or stream won't harm most organisms.

I'm a little surprised eels hung around long enough to be killed.
Posted by Fritz at 4:16 PM