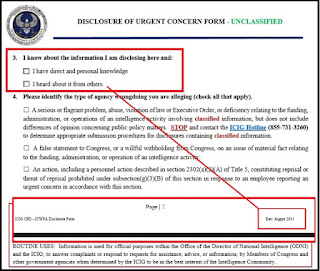 Too much stuff. Breaking news from Sundance at CTH, ICIG Whistleblower Form Recently Modified to Permit Complaint “Heard From Others”…. Well, isn't that convenient . . .


Folks, this “Ukraine Whistleblower” event was a pre-planned event. As we begin to understand the general outline of how the Schiff Dossier was assembled, we are now starting to get into the specifics. First discovered by researcher Stephen McIntyre, there is now evidence surfacing showing the ICIG recently created an entirely new ‘whistleblower complaint form’ that specifically allowed for the filing of complaints “heard from others“.

Prior to the current “whistleblower complaint” the Intelligence Community Inspector General did not accept whistle-blower claims without first hand knowledge. However, the ICIG revised the protocol in August 2019 allowing for the EXACT type of complaint now registered from the CIA whistleblower.

The IGIC revision was made at the same time HPSCI Chairman Adam Schiff was tweeting in August about President Trump, Rudy Giuliani and holding back funding pending assistance with political opponents.


This all happened last month-- the sudden change to stop requiring first-hand information, and then the "whistleblower," coincidentally I'm sure!, being the first to hop on and use those changed standards to file a non-IC related complaint with the ICIG.

This is big. This is the Deep State in action, and we caught them.

and, as sundance documents Phase #2 – With Newly Authorized: “Heard From Others”, Lawfare Group Circles Back To Trump-Kislyak Meeting…. and Whistle-blower Complaint is The Schiff Dossier – Devin Nunes Discusses the Creation of The “Schiff Dossier”…

Sundance also tentatively identifies “Gossip-blower” is Male CIA Operative Formerly Part of White House NSC… A strong possibility for the identity, a person who checks all the boxes of known attributes, follows a trail to Michael Barry. . .

Ace, Sean Davis: I Have a Weird Feeling of Deep State Deja Vu... Didn't we just go through the exact same information-operation script? calling it the Steele Dossier 2.0


Let me also add this: Democrats have started demanding a Special Prosecutor and also demanding -- get this! -- that A.G. Barr recuse himself from overseeing that special prosecutor, because Donald Trump mentioned his name in a call.

Gee, that sure sounds familiar. Maybe they should rehire Rod Rosenstein to wear a wire, too?


Fred Fleitz, NyPo, Former CIA official on whistleblower: ‘How could this be an intelligence matter?’


My suspicions grew this morning when I saw the declassified whistleblowing complaint. It appears to be written by a law professor and includes legal references and detailed footnotes. It also has an unusual legalistic reference on how this complaint should be classified.

From my experience, such an extremely polished whistleblowing complaint is unheard of. This document looks as if this leaker had outside help, possibly from congressional members or staff.

Moreover, it looks like more than a coincidence that this complaint surfaced and was directed to the House Intelligence Committee just after Adam Schiff (D-Calif.), an outspoken opponent of President Trump, expressed numerous complaints in August 2019 accusing President Trump of abusing aid to Ukraine to hurt Joe Biden. This includes an August 28 tweet that closely resembled the whistleblowing complaint.


Republicans would also be wise to read the complaint carefully. The author distinguished between “White House officials” and “U.S. officials.” The former group are clearly political appointees, but the latter group could include career government employees. The complainant only identifies “White House officials” as sources of his information in connection with the July 25 call and subsequent alleged use of the alternate storage system. All other information the person recounts, including the “facts” that started the complainant’s concerns, come from “U.S. officials.” Expect Republicans to try to uncover who these people are, and expect the president’s media defenders to allege this is further proof of the “deep-state conspiracy” against Trump.

Never-Trumper, AllahPundit, Geraldo On The Whistleblower: I’d Like To Kick That Rotten Little Snitch’s Ass I'll just let that one stand.

Sundance again, President Trump Calls Out Adam Schiff for Fabricating Ukraine Call Quotes… I can see Russia from my house, on a good day. Capt Ed, Trump: Shouldn’t Schiff Resign For Lying To Congress? If all the lying congressmen resigned, the place would be a ghost town.

Hot Air citing WSJ, Everyone Is Reading The Whistleblower Complaint — Except Senate Republicans

Ace, No Big Deal, But Ukraine Wasn't Even Aware Their Aid Was Being Delayed/Reviewed Until More Than a Month After Trump Supposedly Threatened to Withhold Aid


Strange kind of threat, where you don't even threaten someone, and they don't even find out there's anything to feel threatened about for a month after the "threat."


In his usual emulation of the mob bosses and dictators he admires, the president said: “I want to know who’s the person, who’s the person who gave the whistleblower the information? Because that’s close to a spy. You know what we used to do in the old days when we were smart? Right? The spies and treason, we used to handle it a little differently than we do now.”

Roger L. Simon at PJ Media Peggy Noonan's Reading Comprehension Problem [Substantially Revised]. To be fair to Peggy, the media has total skipped 500 words, and an intervening speaker in their attempt to portray Trump as calling for an investigation of Joe Biden's role in Ukraine. It appears to be a very deliberate distortion. Still, Joe Biden's role in the Ukraine should be investigated, about $30 million dollars and 3 years worth. John Solomon, Da Hill, These once-secret memos cast doubt on Joe Biden's Ukraine story. David Harsayni, NyPo, Wherever Joe Biden went, son Hunter cashed in. USA Today, Trump Ukraine controversy: President's opponents don't want to talk about 2016 campaign. Joe Biden doesn't want anyone looking too hard at Hunter's Ukraine dealings.


It’s definitely horrible for Biden. The former vice president brought this issue on himself, recounting in 2018 how he told Poroshenko years earlier to fire Shokin or forfeit a promised $1 billion U.S. loan.
. . .
This was supposed to make Biden look like a tough customer apparently, but it raised the issue of conflict of interest, not to mention extortion. And they accuse President Trump of shakedown tactics? Please.


John Solomon is reporting on a myriad of documents that highlight how Vice-President Joe Biden engaged in a pressure and influence campaign upon the government of Ukraine to financially benefit his son Hunter Biden. [SEE HERE] One of those documents is a sworn affidavit by former Ukrainian Prosecutor Viktor Shokin (pdf here . . .)

Tyler O'Neil PJ Media, Biden Accuses Trump of Trying to 'Hijack an Election' in Ukraine Call. It's the problem with that 500 word gap again. The favor Biden asked for concerned CrowdStrike, not Joe Biden. Unless maybe, Joe Biden was involved with CrowdStrike.


Vice President Biden championed $1.8 billion in taxpayer-backed loans to be given to Ukraine courtesy of the IMF. That money disappeared, and Burisma was implicated in its disappearance.

WaFreeBe Warren Flustered by Hypothetical Ethics Question on Hunter Biden, Can't say whether potential VP's son could work for a foreign company IJR,  Senate Democrats Face Questions After Letter Resurfaces of Them Asking Ukraine to Investigate Trump in 2018 Foreign interference in our elections? Sauce for the goose. . .

Must read by Oregon Muse at Ace's, The Morning Rant on double standards.


"I'm tired of hearing news that the IG's office, or the DOJ, or some other federal agency, has determined that James Comey or John Brennan or other Obama administration officials are lying, or broke this or that law, or lied to some court or federal agency, and this is treated like some sort of bombshell. And then that's the last you hear about it.

"What would be a bombshell would be seeing James Comey, or John Brennan, or James Clapper experiencing first-hand the FBI busting into their houses at 4 in the morning, getting arrested, frog-marched to the hoosegow, having to stand trial, and face jail time. As it stands now, for the first time in American History, Deep State actors have attempted a coup against a sitting president -- and are basically getting away with it.

And a bunch of articles on the "new" Democrat impeachment push. 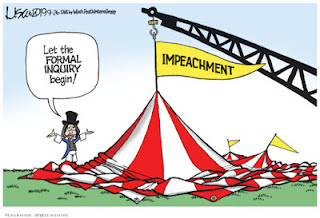 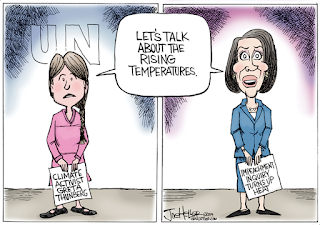 How The House Plans To Use Its ‘Inquiry’ To Instigate Impeachment

Who is responsible for the impeachment circus?

"Very few hearings, if any": Dems hoping to rush through impeachment before Thanksgiving 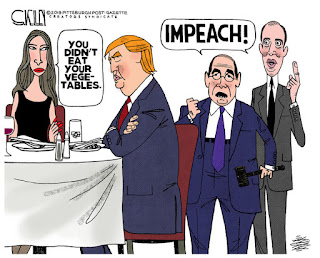 Amodei on Trump impeachment inquiry: ‘Let’s put it through the process and see what happens’

Geraldo Rivera: "This Poor President," His Whole Tenure In Office Defined By "Snitches And Rats And Backstabbers"  RealClearPolitics

Impeach Trump? An America filled with anger and animosity digs in 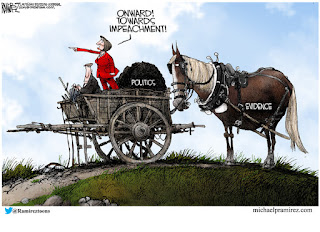 McConnell: We have no choice but to hold a trial in the Senate if the House impeaches Trump